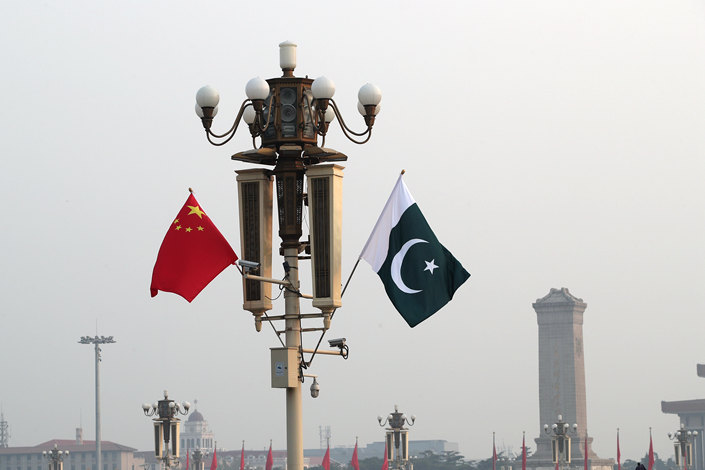 Debt-strapped Pakistan’s “balance of payments crisis is over” with help from Beijing, its finance minister declared, just a day after its prime minister left China without disclosing receipt of the financial support his country desperately needs from one of its biggest creditors.

Speaking during a press conference on Tuesday, Finance Minister Asad Umar said that Pakistan had secured “commitment at the highest level” from the Chinese leadership “to increase our exports, and to do (the things) we should (to) have enough income so that we do not need to borrow,” according to domestic media reports. The countries will hold high-level talks to iron out the terms on Friday, Umar said.

Last month the country made a formal request to the International Monetary Fund (IMF) for an aid package of between $6 billion and $12 billion, which, if approved, would be Pakistan’s 13th IMF bailout since 1988.

But Umar said on Tuesday that Saudi Arabia had agreed to provide $6 billion of support last month, and now China would supply “the rest” of the $12 billion “financing gap.” It was unclear whether the country was still pursuing the IMF financing.

“I want to make that clear in unequivocal terms. We do not have any balance of payments crisis now,” Umar was quoted as saying.

“All rumors were put to rest after PM Imran Khan visited China,” Zhao wrote. He added that China had “agreed to help Pakistan,” and that a package was under discussion. He said Pakistan had agreed to further support two of China’s key initiatives in the country — a China-Pakistan Economic Corridor (CPEC) involving billions of dollars in infrastructure investment, and the upgrading of a free trade agreement between the two sides.

Neither side provided any specific terms of any financial support from Beijing. Mohan Malik, a professor at the Asia-Pacific Center for Security Studies, remained skeptical of Umar’s claim that his country’s financial challenges were over.

“It appears that both countries are engaged in negotiations on a financial assistance package, including the import of more Pakistani goods, which would obviate the need for the IMF bailout, at least for the time being,” he said. “However, the reality is that Pakistan’s export basket is confined to only a few goods.”

Malik suggested that the financial support was aimed at preventing Pakistan from revealing the terms of the roughly $62 billion worth agreements for the CPEC, a Chinese-backed infrastructure corridor whose finances have largely been shrouded in secrecy. “If Pakistan is forced to reveal the harsh terms and conditions of Chinese infrastructure projects under an IMF bailout, that would be severely damaging to China's strategic and economic interests worldwide,” he said.

During his election campaign earlier this year, Khan had questioned the usefulness of CPEC’s infrastructure focus. Beijing appeared to acquiesce to his government’s concerns during his first visit since becoming prime minister, with Vice Foreign Minister Kong Xuanyou telling reporters that CPEC will “tilt in favor of areas relating to people’s livelihoods.”

The corridor is one of the largest projects under China’s global Belt and Road Initiative that has become a signature of President Xi Jinping. That initiative has seen mostly developing countries sign up for billions of dollars in infrastructure construction, usually by Chinese firms and China-supplied financing. But many foreign observers believe the program may be saddling those countries with unsustainable debt.

Despite providing assistance, China would probably prefer to see Pakistan go through the IMF review, said Andrew Small, a fellow at the German Marshall Fund of the United States and an author of a book on Sino-Pakistani ties.

“More concerning for Beijing would have been if Pakistan tries to extricate itself from the IMF program and therefore avoid some of the difficult economic choices the IMF would force it to take,” he said. “China doesn’t want Pakistan to be uncomfortably dependent on it.”

While Khan’s government was able announce the financial support, both analysts said Pakistan’s military could continue to be the main actor in the nation’s affairs with China. “The security dynamic is still paramount in terms of China’s priorities,” said Small. He added that while Beijing has been happy to meet with Khan, “it still expects to manage a lot of the relationship through the army,” with which it is more familiar.

Malik agreed: “The Pakistan military is the ultimate arbiter and the major stakeholder in the CPEC projects and it won’t let the civilian government to do anything to undermine its close strategic alliance relationship with China,” he said.