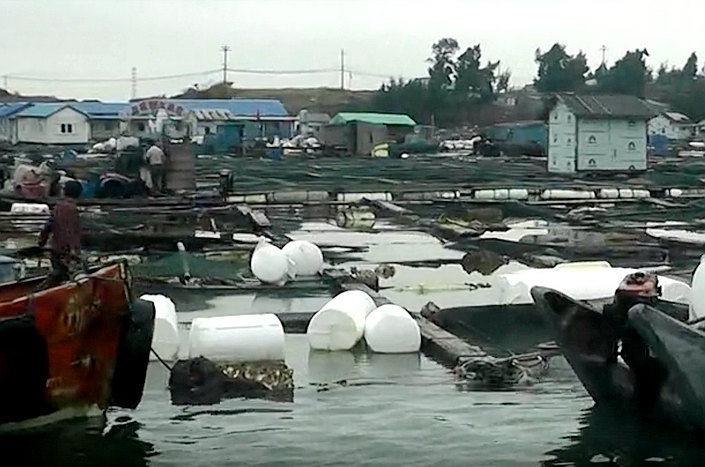 A Tencent Video screenshot shows a wharf in Xiaocuo village after the chemical leak on Sunday. Photo: Tencent

Residents of a port city in China are complaining that a recent chemical spill is poisoning their bodies and their fisheries — but local governments say water quality is now back to normal.

Nearly seven metric tons of C9 aromatic hydrocarbon — a substance frequently used as a solvent in paint and rubber products — were released into the water early Sunday at a petrochemical terminal in Southeast China’s Fujian province.

At the terminal — owned by Fujian Donggang Petrochemical in the city of Quanzhou — a pipe reportedly broke while the material was being transferred onto a chemical tanker.

By Sunday evening, almost all of the affected water had been cleaned up after an effort involving over 100 vessels and more than 600 people, the local government of Quangang district, Quanzhou, said in a statement.

But local residents, especially in Xiaocuo village near the site of the spill, told Caixin the government had not responded appropriately to the incident and that their fishing community faces poisoning and destroyed equipment.

Multiple villagers said the government had not warned people to stay away from the water on Sunday, and that local fishermen, instead of professionals, had to clean up the area themselves using government-issued absorbent materials.

“Previously, after a typhoon, the police and border guards would all send people down to close off the pier,” one villager told Caixin. “No one would be allowed to enter, and the boats would get pulled up one by one. This time, something so poisonous was spilled, but no measures were taken.”

Villagers also complained about a strong smell in the air, which was noticed even days after the spill. “Today the weather was good and the odor was released under the hot sun. It’s awfully smelly,” another local told Caixin on Wednesday. He said his father had been admitted to Quangang Hospital on Monday, after he started vomiting and his hands began cramping up and swelling.

“The doctor said it was ‘gas poisoning’,” he told Caixin. Other villagers reported similar symptoms, especially among older men working at the area’s fisheries. They also reported that plastic equipment at the fisheries had been corroded after the spill. Pictures provided to Caixin on Wednesday showed fishing rafts with plastic undersides that appeared to have partially dissolved.

Aromatic hydrocarbons floating on the surface of the sea can break down when exposed to sunlight, releasing toxic pollutants, which can cause vomiting and cramping in humans, Fang Sixin, the chief physician at the Hefei Disease Prevention and Control Center in Anhui province, told Caixin. But Fang said that Xiaocuo residents would need to undergo tests before any cases of poisoning could be confirmed.

According to the Quangang district environmental protection bureau, the concentration of volatile organic compounds in the air was at a safe level on Sunday. But, when contacted by Caixin, the bureau refused to disclose the exact location where it had tested the air or its criteria for determining safety levels, saying that “because the standard had been met, there was no need to continue testing.”

Preliminary investigations showed that a connector on the hose used by Fujian Donggang had deteriorated due to age, causing the spill, the bureau said in a statement.