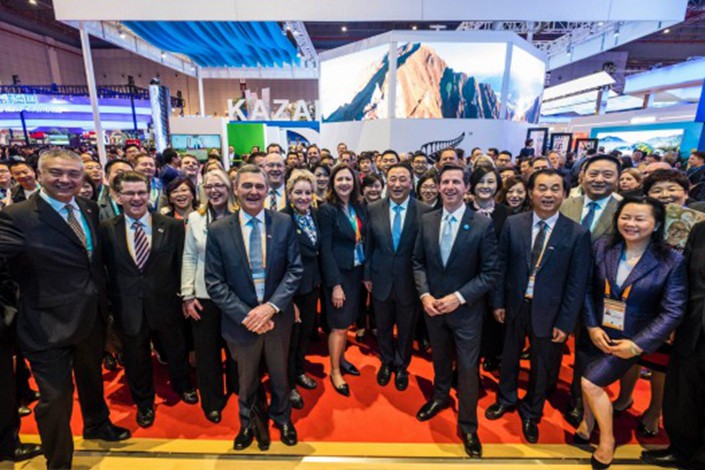 (AFR) — Major Australian exporters to China have signed billions of dollars in agreements this week, reaffirming trade ties with the world's second biggest economy but say they are concerned about the negative impact a prolonged trade war between Beijing and Washington will have on their businesses.

Australian diary, vitamin and mining companies selling products to China have welcomed an apparent thaw in the relationship between Canberra and Beijing ahead of Foreign Minister Marise Payne's visit this week. However, they said a trade dispute between the world's two biggest economies would not be good news for anyone.

"We are yet to fully understand the longer term impacts of this trade protectionism. History has demonstrated that if you have protracted periods of trade protectionism, it is not positive in terms of the growth outlook," Fortescue Metals Chief Executive Elizabeth Gaines said on the sidelines of the China International Import Expo (CIIE) in Shanghai.

"But having said that, I think China has a number of levers it can use to stimulate the economy. The government is investing in the further development of infrastructure and that is driving that demand for steel," she said.

Christine Holgate, the chief executive of Australia Post and former boss of vitamins giant Blackmores, said she felt positive about the thaw in Australia's relationship with China after months of tension but said any kind of global uncertainty was bad for business.

"Anything that creates that global uncertainty impacts consumer confidence," Holgate told The Australian Financial Review. However, she said China's promise this week to encourage foreign imports sent a strong message. "Xi Jinping's speech was very much that the door is open."

More than 150 Australian companies selling goods to China were in Shanghai this week as part of a delegation being led by Trade Minister Simon Birmingham for the city's first import-themed trade fair, which has become a symbol of China's political message to the rest of the world that its economy is open to foreign companies.

The minister oversaw the signing of A$15 billion ($10.9 billion) in Memorandum of Understandings (MoUs), largely symbolic agreements which are popular in China to reinforce existing business relationships or deals. Fortescue Metals signed eight MoUs with major Chinese steel mills on the sidelines of the conference. BHP Billiton signed several deals with potential potash customers in China, including Sinochem and CNAMPGC, the largest importers of potash into the country.

"There has been solid demand growth since potash prices moderated and we expect this to continue, albeit potentially volatile from year to year as is inherent in the market," BHP's China country president Y.K Wang said.

"We see these MoUs as a strong indication of Chinese interest in what would be high quality potash product."

BHP has an investment in a Canadian potash project named Jansen, where it has been building shafts and other infrastructure after announcing a $2.6 billion investment in August 2013.

State politicians also in China for the expo said they were hopeful about signing more deals that would boost fresh food imports to the country. "The message I'm hearing is clear, the demand for our high quality Australian goods is at an all-time high, drought or no drought," New South Wales Trade Minister Niall Blair said.

A political dispute over Victoria's controversial decision to bypass the federal government and sign up to China's Belt and Road Initiative threatened to overshadow the Coalition's positive messages coming out of Shanghai this week. Victorian Premier Daniel Andrews is under growing pressure to reveal details of his secret deal with China over a controversial infrastructure initiative, amid criticism from Prime Minister Scott Morrison.

Gaines welcomed the Victorian government move and said the federal government should sign up to the project, which would boost demand for iron ore.

"The fact Victoria has signed the MoU is a positive step. I haven't really understood why Australia has not been more embracing of the opportunities for Belt and Road because our very strong relationships and we think it will present further opportunities for Australia and Australian companies," she said.