By Cao Wenjiao and Fran Wang 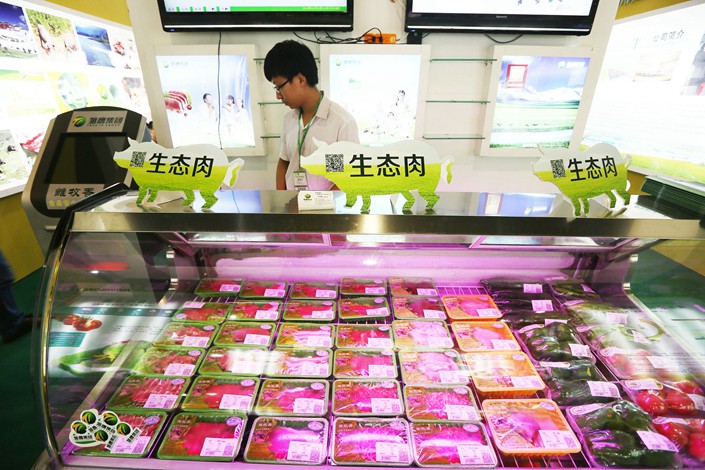 Pork on display at an industry even in Beijing in June 2013. Photo: VCG

The outbreak of African swine fever spreading across China is starting to infect its financial markets, with a desperate pig farm operator who defaulted on a bond offering to pay interest on its debts in pork amid a cash crunch it's blaming on slumping sales.

Shenzhen-listed Chuying Agro-Pastoral Group wants creditors to accept ham and premium pork products rather than cash as interest payments on its borrowings, the company said in a filing (link in Chinese) with the stock exchange on Thursday. Creditors owed a combined 271 million yuan ($39 million) in principal and interest have agreed to the offer, it said, without providing further details. The principal will be repaid in cash but payment is being deferred, it said.

The announcement came after the privately owned company said on Monday (link in Chinese) that it was unable to repay in full a nine-month bond with principal and interest totaling 528 million yuan due that day. China Lianhe Credit Rating Co. cut the company's long-term issuer credit rating to C from B after the default, effectively giving its bonds junk status, and Chuying warned on Tuesday that its efforts to raise money may be negatively affected by the downgrade.

In October, the company, which is based in Zhengzhou in central China, was named and shamed by a law enforcement information system under the Supreme People's Court as “dishonest” after it failed to pay back a 150 million yuan loan to a trust firm.

Chuying said generating cash through sale of pigs and related products had become increasingly difficult because of government measures to stem the spread of African swine fever, including curbs on transporting live hogs.

Chuying sold 121,000 pigs for a total of 129 million yuan last month, half of what it sold and raised in July before the first outbreak was reported, according to data provided in a company statement (link in Chinese) on Wednesday.

African swine fever, found in warthogs, bush pigs and ticks, has historically been reported across Europe, Russia and sub-Saharan Africa, but never in East Asia until China reported the first outbreak in the northeastern province of Liaoning in early August. It does not harm humans but is always fatal in pigs.

Hundreds of thousands of infected hogs have been culled since the first outbreak was discovered. The government has handed out subsidies to compensate farmers for the slaughtering of infected pigs, banned the transport of live pigs out of disease-hit areas and strengthened oversight over the transportation of livestock and poultry by road.

Even so, the virus has spread to more than half the country’s provincial-level regions, including Jilin in the northeast, Inner Mongolia in the north and the central province of Henan — areas where most of Chuying’s farms are based.