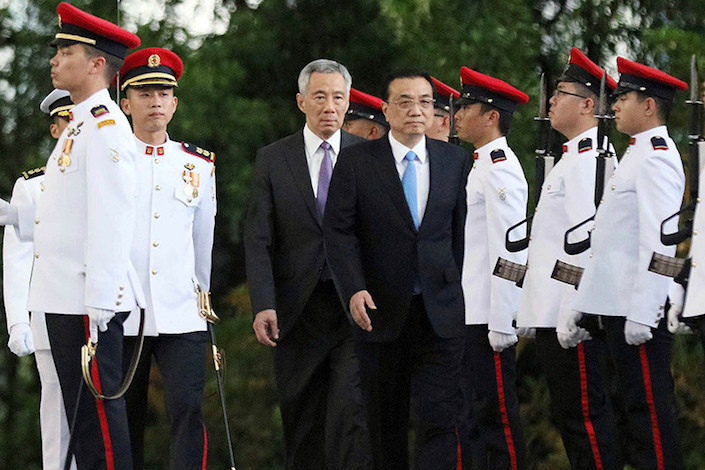 China and Singapore Monday signed an upgrade of a bilateral free trade pact to grant greater market access to each other’s goods and companies after Chinese Premier Li Keqiang arrived for his first visit to the Asian neighbor.

The signing followed nearly three years of negotiations to expand the China-Singapore Free Trade Agreement (CSFTA), which has been in place since 2009.

For instance, the new agreement grants greater access to China for Singapore’s petrochemical products, which accounted for about 25% of Singapore's total exports to China in 2017.

Under the new agreement, the two countries will expand cooperation in areas such as courier service, legal services and construction, while adding commitments for new partnerships on e-commerce, competition and the environment.

The new agreement also added terms regarding bilateral cooperation on China’s Belt and Road Initiative for the first time, according to the commerce ministry.

The trade negotiations were completed earlier this month, Singapore media reported last week. The new protocol will come into force after both countries complete related procedures.

The current CSFTA came into effect in January 2009 as the first comprehensive bilateral trade pact between China and an Asian country. Trade and investment links between the two countries have improved steadily under the accord. In 2017, total bilateral trade reached 685.5 billion yuan ($94.5 billion), making China the top trade partner of Singapore, official data showed.

The trade protocol is among several memorandums of understanding signed between China and Singapore following a meeting of Li with Singapore Prime Minister Lee Hsien Loong. Other agreements involve exchanges and collaboration on infrastructure, transport, cultural, finance, and other areas.

Li arrived at Singapore Monday for a five-day visit, the first official visit by a Chinese premier to Singapore in 11 years. Chinese President Xi Jinping’s last visit to Singapore was in 2015.

During the visit, Li will attend meetings with leaders from the Association of Southeast Asian Nations (ASEAN) as well as Japan and South Korea for an annual summit. The leaders will discuss a Regional Comprehensive Economic Partnership, a trade deal that could cover half the world's population, according China’s official Xinhua News Agency.

China and ASEAN should work together to forge a closer community with a shared future and promote peace and prosperity in East Asia, Li wrote in a signed article published Monday by Singapore’s Straits Times newspaper.

In the face of “rising protectionism and unilateralism, we need to join hands to send a positive message of upholding the World Trade Organization-centered multilateral trading system and advancing trade and investment liberalization and facilitation,” the premier said in the article.