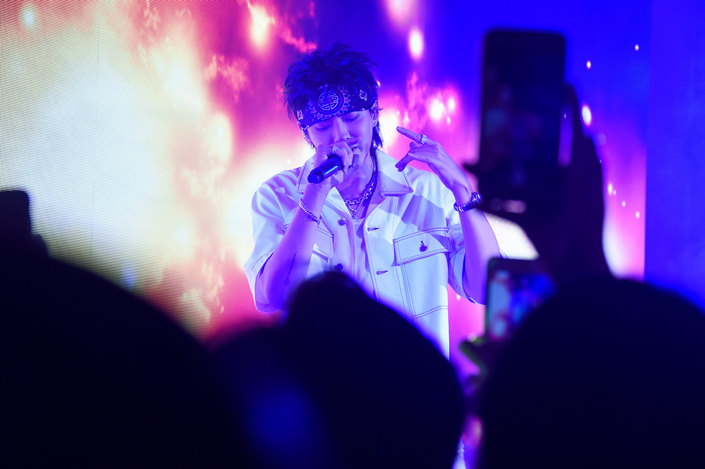 (Bloomberg) — American pop star Ariana Grande had every reason to expect that her new single, “Thank U, Next,” would race to the top of the U.S. charts when it was released earlier this month. When she checked iTunes after its release, though, she met with a surprise. Kris Wu, a superstar in China, not only had the No. 1 spot on the iTunes’ singles chart but also seven of the top 10 songs. It was an extraordinary achievement for an artist with almost no North American profile, and Grande and her camp weren’t buying it. Rumors started flying on social media that “bots” were behind Wu’s chart dominance.

Skeptics were right about one thing: There was an organized effort to boost Wu’s sales. But it was organized by Chinese fans who spent their own money to push him up the U.S. charts, not music promoters or programmers.

The campaign wasn’t unusual, either. For years, Chinese fans have gone beyond simply buying the music of their favorite stars and engaged in organized mass efforts to boost their chart positions and brand equity, and to influence their artistic decisions. Fans of the Chinese boy band TFboys have, among other activities, bought up an entire run (120,000 copies) of Harper’s Bazaar featuring a member on the cover, purchased billboards in Times Square to wish happy birthday to another member, and prepared custom textbooks for yet another member when he was prepping for China’s college entrance exam.

The success of this multibillion-dollar “fan economy” has been so profound that Chinese brands are now actively trying to profit from it. Western companies looking to break into the mainland market would be wise to pay heed.

The origins of China’s fan economy — roughly defined as the value and revenue generated by the interactions between fans and stars — predates social media. In 2005, a scrappy provincial television station launched the “Mongolian Cow Sour Yogurt Super Girl Contest,” an American Idol knock-off. Viewers voted for their favorites via text messages (for which they paid) and, during the final episodes, formed fan clubs which campaigned for particular favorites. In Shanghai, the clubs canvassed shopping malls, subway stations, public parks and other public spaces in search of votes for performers.

What drove this intensity remains obscure. For many young Chinese, celebrity-worship represents a rare opportunity to express support for lifestyles and backgrounds that are typically marginalized in China. It’s perhaps no accident that many of the most prominent “Super Girl” winners came from provincial backgrounds and were strikingly androgynous.

By the time “Super Girl” was suspended in 2011, celebrity-worship had moved online, propelled by social media and widespread smartphone ownership. The culture took on particular shape in China, in contrast to the West. First, fans organized into clubs (the biggest celebrities enjoy the support of hundreds and even thousands of clubs), some of which are encouraged by celebrities and their managers. And second, stars and their handlers worked hard to make the fans feel that they had a role in shaping an artist’s career, thereby strengthening fan loyalty and engagement.

This fan influence can take several forms, from real-time back-and-forth in online forums, to launching GoFundMe-style campaigns to promote their favorite star’s latest project, to buying multiple copies of a new release. For many celebrities, turning fan-club members into subscribers is a natural and common process, especially for celebrity authors. One recent estimate predicts the value of such fan-economy interactions could exceed $15 billion by 2020.

Of course, the phenomenon isn’t entirely innocent. Agencies exist to create fan bases and ensure that they’re boosting a celebrity’s image. According to one recent report in Chinese media, “professional fans” who gin up enthusiasm, police online discussions and organize other fans can make more than $4,000 per month in salaries and subsidies. According to that report, only 30% of celebrity-fan interactions on Weibo, China’s popular Twitter-like social media site, comes from actual fans.

Professional or not, the strategies behind China’s fan economy are expanding beyond boy bands to traditional retail and consumer brands. Xiaomi Corp., the eight-year-old upstart Chinese smartphone and consumer-electronics company, grew into one of China’s most prominent brands by using fan-economy methods to cultivate a rabid and loyal fanbase. It has fan clubs, it incorporates fan suggestions into its development pathway, and fans respond by spending their own cash to boost Xiaomi (traveling to launch events; designing Xiaomi-related creative products).

Meanwhile, Chinese celebrities are increasingly using social media to sell products to their followers. The most notable example is Little Red Book, a so-called social-commerce app focused on fashion and beauty, where Angelababy, a Chinese actress and Dior brand ambassador, recommends products to her more than 14.4 million followers.

Foreign celebrities and brands will struggle to compete with that kind of grassroots support. Kim Kardashian West, who joined Little Red Book in October, has a mere 105,000 followers interested in her English-language posts and U.S.-centric career. Ariana Grande isn’t on the site at all. Meanwhile, outside of Apple, no U.S.-based brand has the kind of grassroots cult following in China that Xiaomi enjoys. Over time, perhaps they can overcome the cultural and linguistic barriers that prevent them from developing those kinds of followings in China. Until they do, foreign brands may find Chinese celebrity to be the latest frustrating trade barrier they need to overcome.