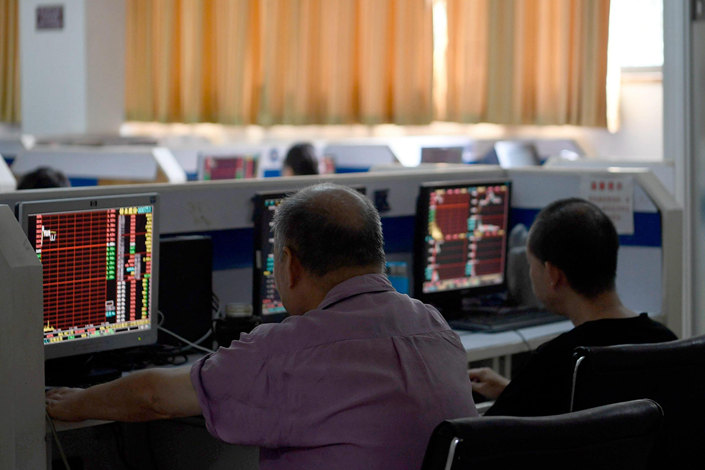 Speculation on takeovers of listed shell companies has sent their shares surging as regulator relaxes stance on mergers and acquisitions. Photo: VCG

The government’s campaign to stop the stock market slump, support the private sector and boost investor confidence has led authorities to relax many regulations originally aimed at reining in risk or curbing undesirable activity.

The securities watchdog’s recent announcement that it will encourage mergers and acquisitions (link in Chinese) to help cash-strapped listed companies has triggered a renewed hunt for so-called shell companies amid speculation that the official stance on backdoor listings is being softened. The notice is one of several released by the China Securities Regulatory Commission (CSRC) in October to support acquisitions, including a pledge to fast-track small deals and allowing acquisitions if they provide additional financing to pay off a company’s debts.

The CSRC has been blowing hot and cold over shell companies for the last two years depending on how much of a danger it sees such entities as posing to investors. These firms have few, if any, assets or operations and remain on the stock exchange in the hope that unlisted companies will buy them as a way of going public on the cheap and without going through the review and approval process required by the commission, a process known as a backdoor listing. The selling prices shell companies can command rise and fall according to the regulatory environment.

Speculators have been quick to jump on the CSRC’s latest notices as a signal that shell companies could become a hot target again for firms seeking backdoor listings.

There’s been surge in prices of shares of small, beaten-down companies with “shell” qualities, mostly those with Special Treatment (ST) status, a tag given to firms in financial distress or with regulatory problems. On Monday alone, almost 50 ST stocks jumped by their daily limit of 5%. Auto parts manufacturer Hengli Industrial Development Group Co. Ltd., a company that lost 46.8 million yuan ($6.72 million) in 2017 on sales of 58.7 million yuan, surged by 236% to 8.69 yuan in the 13 trading days through Nov. 12.

Investment bankers told Caixin that the cost of buying control of a shell company has risen sharply. On such example is Shenzhen-listed copper tube maker Guangdong Jingyi Metal Co. Ltd. The copper pipe manufacturer said in an announcement Sunday that its two controlling shareholders had agreed to sell a 30% stake in the company at 15.96 yuan per share to building and engineering conglomerate Jiangsu Nantong Sanjian Construction Group Co. Ltd. in a deal worth 1.2 billion yuan. When the purchase is completed, Nantong Sanjian will become Jingyi Metal’s controlling shareholder.

The agreed price is 138% higher than Jingyi Metal’s closing price of 6.72 yuan on the last trading day before the deal was announced. The shares jumped by the 10% daily limit to 7.39 yuan on Monday, the first trading day after the news, and on each of the two following days as speculators piled in.

Nantong Sanjian, which has no listed subsidiaries, has no overlapping businesses with Jingyi Metal, which means there will be no synergy benefits from the tie-up. Nantong Sanjian said in the agreement that so far it has no plan to sell or swap its shares in the listed firm, but will disclose any relevant information if there’s any change in the next 12 months.

“Whenever there’s a reform which has the objective of helping the Chinese stock market prosper, it becomes self-defeating,” Yu Dongying, head of the investment banking department at a major brokerage firm, wrote in a Chinese commentary on Caixin on Monday. “We’ve been unable to establish a truly effective pricing system for A-shares and one of the reasons for this is the hype around buying and selling shell companies.

“This kind of profiteering distorts the market’s pricing mechanism. So how can the stock market act as an effective tool for mergers and acquisitions of real businesses and promote industrial restructuring?” Yu wrote.