Regulator Remains Toothless in Bid to Rein In Shell-Company Trading

By Leng Cheng and Zhu Liangtao 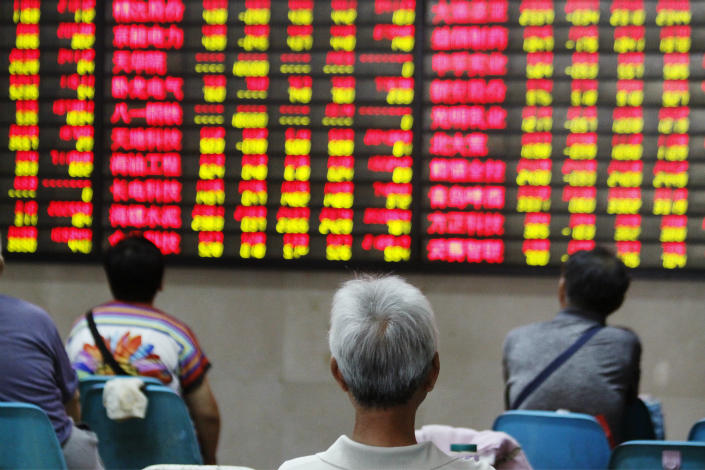 The China Securities Regulatory Commission said in June 2016 it would issue tighter rules to curb shell-company trading, but it has yet to announce new rules although it has heightened scrutiny over such deals. Above, a stock trader watches prices at a stock market in Najing, Jiangsu province, on Wednesday. Photo: Visual China

Although China’s securities regulator has for more than a year vowed to rein in shell-company trading, Zheng Yonggang might continue making millions of yuan in profits from reselling listed shells to those that seek “backdoor listings.”

Shell companies in general have little investment value in their own right. Their resale value lies in helping other companies get a “backdoor listing” — the right to trade on an exchange without first having an initial public offering (IPO). Years of unpredictable and opaque IPO approval process in China explain why shell companies have become “commodities” that are sought after by companies seeking to float on an exchange.

The China Securities Regulatory Commission (CSRC) said Friday that it remains committed to reining in shell-company trading. The CSRC said earlier that the brokering of shell companies is “speculative trading” that could increase the volatility of the market, might constitute fraud, or enable money laundering.

In June 2016, the CSRC said it would issue tighter rules to curb shell-company trading. It has yet to announce new rules although it has heightened scrutiny over deals involving the buying and selling of shell companies.

In 2015, Shanshan, through one of its unlisted unit, acquired Shandong Jiangquan Industry Co. for nearly 600 million yuan, or about $98 million at the time. Shanshan has since then tried three times but failed to find a partner to jointly reorganize Jiangquan’s business, which was primarily ceramic production.

In June, Jiangquan said in a regulatory filing to the Shanghai Stock Exchange that the unlisted unit owned by Shanshan agreed to sell the majority stake in the company to an information services company for 1.06 billion yuan ($157 million). Shanshan could have pocketed an accounting profit of 460 million yuan from the deal.

However, on Wednesday, Jiangquan said the sale was called off. The bourse sent the company an inquiry on Thursday asking why the deal fell apart. Later the same day, Jiangquan said in a separate statement that Shanshan is seeking a new buyer, a Shenzhen agricultural firm, with the deal price to remain the same. The unexpected turn has attracted another regulatory inquiry, Jiangquan said.

Shares of Jiangquan surged more than 25%, to 10.38 yuan, in the three trading days after the first proposal was made public in June, and retreated to 9.3 yuan before it suspended trading on Friday.

“Any disciplinary punishment could be activated if there were potential misdeeds on information disclosure,” and it demanded an explanation from the company on the premium of the resale, which it deems “abnormally high,” Jiangquan cited the bourse as saying.

How this deal will end remains unknown, although thus far the regulator hasn’t stopped this transaction from proceeding. Shell “traders” can still fetch fat margins as long as there is demand for reverse mergers or backdoor listings.