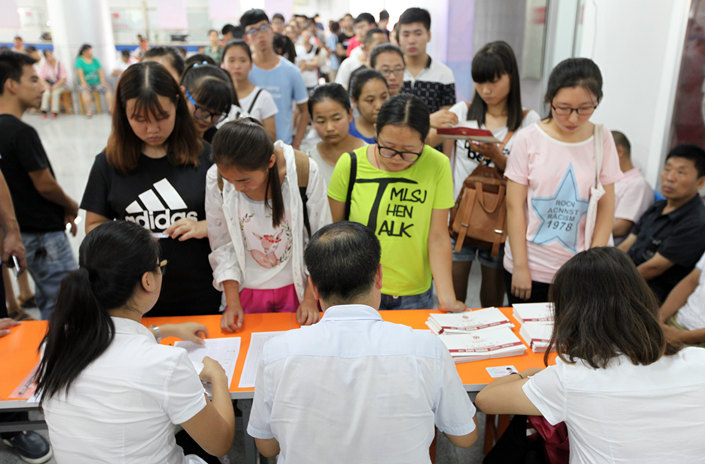 Many students applying for financial aid at Chinese universities find that submitting written documents isn’t enough — to win the cash, they must give speeches in public about their plights, and hope their stories are “moving” enough to earn the audience votes they need to qualify.

This selection process, which is popularly dubbed the “misery competition,” resembles a reality television show and often results in on-stage tears and students revealing private details about the extent of their families’ poverty in an effort to seem like the most deserving applicants. Videos of speakers and audience members — often fellow students — weeping at a financial-aid speech event circulated on Chinese social media in August 2016, drawing public attention to the practice.

The Ministry of Education is attempting to put an end to these theatrics, recently issuing a document forbidding misery competitions, citing concerns about students’ privacy and dignity. Universities are now scrambling to find an alternative way to pick financial aid recipients after years of relying on such public displays.

Chinese local governments and higher education institutions provided a total of 188.2 billion yuan ($27.04 billion) in financial aid to 95.9 million students from low-income households in 2017, according to Ministry of Education data. Universities concerned about fraudulent applications have turned to having audience members vote on applicants’ speeches, with the reasoning being that this process is more transparent than decisions made by a small committee.

Critics say the real reason for using this process is laziness and universities’ fear of taking responsibility. University employees worry that the blame will fall on them if they mistakenly pick “fake” applicants, so they prefer to put the applicants under public scrutiny, one employee told Caixin.

“You can’t say that just because someone gave a better speech, it means they’re really poor. There are still suspicions of fraud,” Lei Wanpeng, deputy director of the School of Education at Central China Normal University, told Caixin.

The cost of properly verifying a student’s financial aid application is lower than universities expect, said Jiang Zhaohui, a deputy director at the Chinese Academy of Educational Sciences. “Every student has an electronic information file, including remarks about their family situation.” Some universities, like Nanjing University, have put into place complicated systems for reviewing financial aid applications involving many layers of supervision.

Other measures aimed at verifying financial aid applications have also faced criticism for being unfair or unreasonable. In 2016, for instance, Jiangsu University decided to remove 21 students from its financial aid program because their monthly phone bills had exceeded 150 yuan each.

For some students, the humiliation of having to publicly expose their family’s hardships lingers long after they have won their scholarships. According to a 2015 survey by the Beijing municipal government, 52% of students from poor households said that their impoverished background made them feel inferior to their peers.