By Ren Qiuyu and Zhang Zizhu 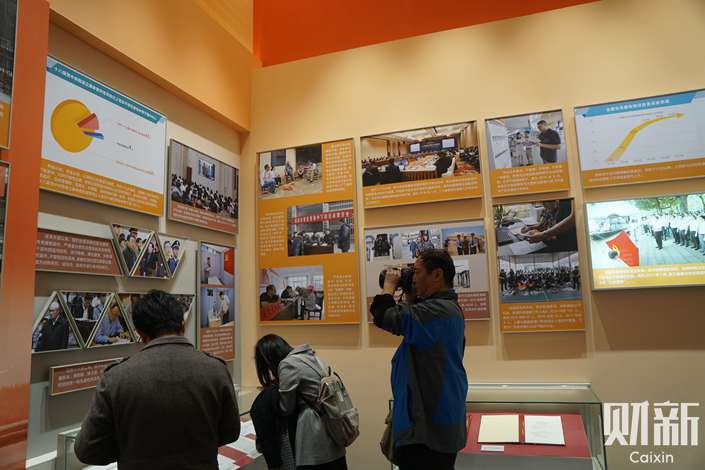 Museum visitors examine a corner of the exhibition devoted to the successes of the anti-corruption campaign. Photo: Zhang Zizhu/Caixin

Handwritten letters of repentance written by officials caught in the ongoing anti-corruption crackdown, including one purportedly penned by former internet czar Lu Wei, were on display at a recent Beijing exhibition celebrating the 40th anniversary of China’s reform and opening-up policy.

In an intimate letter that has not been previously seen in public, Lu expressed embarrassment for his wife and son. “My lifestyle has caused her so much pain. We often argued about this. She told me once in despair: ‘I can’t control you, but the Communist Party will regulate you sooner or later.’ Now the prophecy has come true,” he wrote of his wife.

“My son, he just celebrated his 30th birthday. I have not set a good example for his path in life and I have not fulfilled the responsibilities of a father,” he wrote.

Last month, Lu pleaded guilty to accepting 32 million yuan ($4.6 million) in bribes. His sentence has not yet been announced.

The unit on the anti-corruption campaign, which is part of a section titled “Historic Changes,” also includes materials related to the investigations of Li Yihuang, former vice governor of Jiangxi province; Wang Sunyan, the former party secretary of Gansu province; and Xiang Junbo, the former chairman of the now-defunct China Insurance Regulatory Commission.

According to nationalist state-backed news outlet Global Times, the inclusion of anti-corruption in the exhibit “shows the government’s determination to continue fighting corruption.”

When Chinese President Xi Jinping took office in 2012, he launched the most far-reaching and intense anti-corruption campaign China has seen in decades. The campaign has resulted in the fall of thousands of high-level “tigers” and low-level “flies.” According to official numbers, hundreds of officials at the provincial level and above have been placed under investigation, expelled from the party, arrested, or sentenced since the beginning of the campaign.

In January 2017, the Central Commission for Discipline Inspection, the top anti-corruption watchdog, released a TV series featuring video confessions of three of its officials who were indicted on charges of corruption. Before the Communist Party’s Sixth Plenum in 2016, an eight-part TV series featured video confessions of dozens of corrupt officials.

Of the officials featured in the exhibit, Lu Wei is the one with the highest profile. He was the first so-called “tiger” to be placed under investigation for corruption after the 19th National Party Congress in October 2017. Before becoming head of the Cyberspace Administration of China — a position he held until he stepped down in mid-2016 — he served as the deputy head of the Communist Party’s publicity department and in 2015 was named by Time magazine as one of the world’s 100 most influential people.