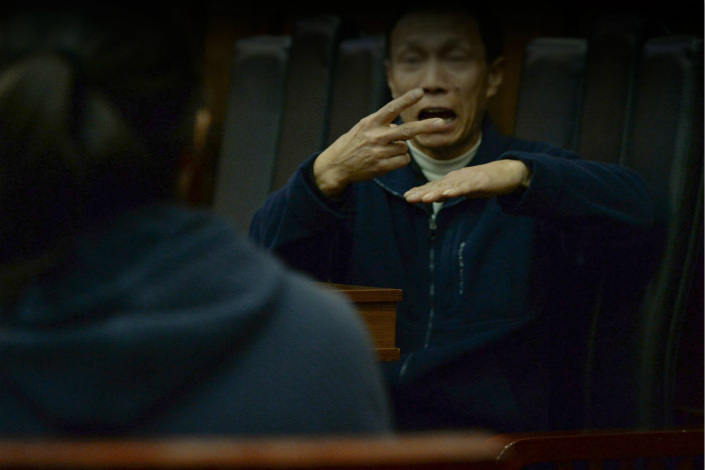 A man with a hearing impairment communicates with his court interpreter in Beijing in November 2015. Photo: IC

(Sixth Tone) — Despite it being his mother’s birthday and 9 p.m., Tang Shuai rushed back to his law firm in southwestern China’s Chongqing. An elderly woman who’s deaf and cannot speak had been waiting in his office for hours to meet probably the only person in China capable of solving her problem.

Tang is known in China’s deaf community as the country’s only lawyer proficient in sign language. The 34-year-old is a busy man: The government says there are about 28 million Chinese people with hearing impairments — roughly equivalent to the population of New York state — but some experts peg the number at 72 million. When they get into legal trouble, Tang is often their only hope. He carries two phones, both of which have reached the maximum 10,000 WeChat contacts, and his days are full of video calls. He carries three power banks to avoid running out of power.

But Liu Shiying, 74, doesn’t know how to operate a phone: She could only show up at Tang’s office and wait. When Tang arrived, Liu started explaining her story. She anxiously signed that she was born with hearing loss. After her husband — who was also deaf — and their two children had passed away, she lived by herself. All she owned was a two-bedroom apartment. But, Liu communicated, earlier this year, a friend of her late daughter asked her to sign several documents that Liu did not understand; Liu was later told that her apartment had been sold below its value at a price of 400,000 yuan ($57,500). Her daughter’s friend had run away with half of the money.

Chinese sign language is often not accurate enough for legal situations, and people who rely on it usually cannot read or write. Like with many of Tang’s consultations, he had to take time to tell Liu the basics of law and triple-check certain details. Liu didn’t leave until about 2 a.m. An eerie mist had settled over Chongqing. “Poor lady,” Tang whispered, smoking cigarettes, one after another. “But that’s the reality for many deaf people.” He’d have to review the documents she gave him to see if there was even enough to file a police report.

Liu’s case, which is still ongoing, is one of many that wouldn’t usually fall under the domain of a criminal lawyer. But clients still come to Tang with questions that would ordinarily be answered by marriage counselors, financial advisors, or retirement officials. His office — which employs eight hearing-impaired assistants and interns who are proficient in sign language — runs a WeChat account to answer common questions. Tang was once contacted by so many people who had gotten tricked into Ponzi schemes that he made an explanatory video. “It’s hard for me to feel like I’m a criminal lawyer when I’m solving everyday problems for deaf and mute clients,” Tang said. (There is little sensitivity in China surrounding language to describe people with disabilities.)

Tang’s journey to help those with hearing loss stems from his childhood in Chongqing. Both his parents are deaf, use sign language, and cannot read or write. They worked at a welfare factory for disabled people and lived with their colleagues, most of whom are also hearing impaired. After Tang was born, his father refused to communicate with him in sign language and sent him to live with his grandmother. “My father believed that deaf-mute people are at the bottom rung of society,” Tang said. “He thought that being around deaf and mute people would mean I wouldn’t become a worthwhile person.”

Nevertheless, his grandmother insisted he learn sign language because, when Tang was 5 years old, his father came down with appendicitis, and nobody in the hospital could communicate with him. “In general, people who are deaf only have friends who are also deaf, and only marry deaf people. Their world is completely isolated,” he said. Tang learned sign language from his parents’ friends and quickly mastered the language.

After his parents were laid off in 1993, the family always struggled to pay tuition and examination fees. His classmates bullied him. Once, a boy pointed at him and shouted: “Your father and mother are deaf and dumb!” At the behest of others, Tang’s illiterate father named him Shuai, meaning “commander,” hoping he’d grow into a talented man. But the best future his parents could imagine for their son was as a blue-collar worker or security guard. Tang had bigger plans.

“I couldn’t decide whether I should study medicine or law: Both fields are crucial for deaf and mute people,” Tang said. He chose the latter and then worked as a sign language interpreter for the police before becoming a lawyer in 2012. He noticed how the courthouse could be merciless toward suspects and criminals who rely on sign language. Much of this is due to a lack of interpreters, which only became a government-approved line of work in 2007 — but even today, China’s most modern cities have very few skilled interpreters. In Shanghai, there are just 30 to serve 230,000 people with hearing impairments.

There’s an even greater shortage of multilingual interpreters with adequate legal knowledge, Tang said. Most courthouse interpreters are also full-time teachers. But, since the 1990s, schools use a standardized form of Chinese sign language, which has similar grammar as Mandarin and is known as “signed Chinese.” Outside the education system, however, many people use regional sign language variants, which differ in grammatical structure and gestures from signed Chinese. “Many of the interpreters only learned signed Chinese and sometimes can’t fully understand deaf people,” Tang said. Sometimes interpreters will pretend to have understood something. Tang remembers a case in which a woman was charged with theft because the interpreter translated “I didn’t steal a phone” into “I stole a golden iPhone.”

With low levels of literacy and education, many suspects who are hearing impaired know little about the legal system. Often, Tang said, interpreters don’t translate court rules and defendants’ litigation rights. He recalled one case in which authorities recorded a man admitting to five instances of theft, but when the man later talked to Tang, he said he’d actually denied three of them. His interpreter was a former primary-school teacher who had a grudge against him. Though he was legally allowed to request to withdraw the interpreter from the case, he wasn’t aware he had this right.

Some suspects try to bribe their interpreter, thinking the linguists have the power to grant them leniency. “In sign language, ‘judge,’ ‘procuratorate,’ and ‘lawyer’ are expressed with the same gesture — it’s all ‘law.’ For them, it’s hard to tell the difference between these professions,” Tang said. “In the court, the most respected role is the sign language interpreter, whose words decide the defendants’ crime and punishment, sometimes even life or death.”

According to a 2016 report on the judicial protection of Chinese people with disabilities, published by the Public Interest and Development Law Institute of Wuhan University and United Nations Development Program, the lack of sign language interpreters can affect fairness in law enforcement and the judicial system. In most cases, one sign language interpreter is involved in all litigation steps, and it’s difficult for others to judge whether they are qualified or making faithful translations. The report noted that it was tough to communicate with their respondents: “Most of time, the written language is not effective enough for communication.”

“We have come across many cases in which sign language interpreters took advantage of deaf people’s inability to hear, giving them false information that harmed their rights and privileges,” Cui Jing — who contributed to the report as a representative for deaf people — told Sixth Tone. “For example, according to the law, a deaf person might only face a 15-day detention [for most minor violations]. But they’re told [by the interpreter] that they’re involved in a severe case and could be detained for six months, but that if they were to pay a fee, they could be released in advance.” In the worst cases, authorities either didn’t notice or sometimes colluded with the interpreters to cheat deaf people.

Cui, 27, has parents who are both deaf. She lost her hearing when she was 3, and in 2014 founded ProSigner, one of only a handful of organizations in China that provide legal assistance to people with hearing disabilities. She has written guides for people with hearing impairments, as well as their interpreters, lawyers and judges. Among her suggestions is for courthouses to provide two interpreters per case to ensure accuracy, and to provide real-time subtitles so suspects can follow along with conversations. “Lawyers could pay more attention to deaf people’s facial expressions to check whether they have understood the interpreters,” Cui said. In the end, ProSigner argues that it comes down to people accepting sign language as a language.

One of Tang’s interns, Liao Jun, identifies as deaf. “I can’t hear, I can’t speak, and I’m isolated from people who can hear,” the 23-year-old told Sixth Tone by text message. “I’m not perfect — I often feel this way.” Though Liao received a hearing aid as a present for getting into college, he wasn’t relieved. Having grown accustomed to the silence, everything has since become too noisy for him: a soft love song, a movie’s surround sound, a vibrating smartphone, or even the sound of a crumpling plastic bag.

Liao, who studied design, was rejected by several architect firms because of his hearing impairment. Potential employers told him they feared he couldn’t communicate efficiently with clients. He finally landed a position at Tang’s law firm. He knows it’s hard to come by lucrative work for representing deaf clients. Earlier this year, he spent three months working on the case of a Beijing client who was in a dispute with his employer. The client paid Liao and Tang 3,000 yuan — the maximum he could pay — but it wasn’t even enough to cover their travel expenses. But Liao’s determined. “I hope that, one day, I can also be a lawyer, and Mr. Tang won’t feel so alone anymore,” he said.