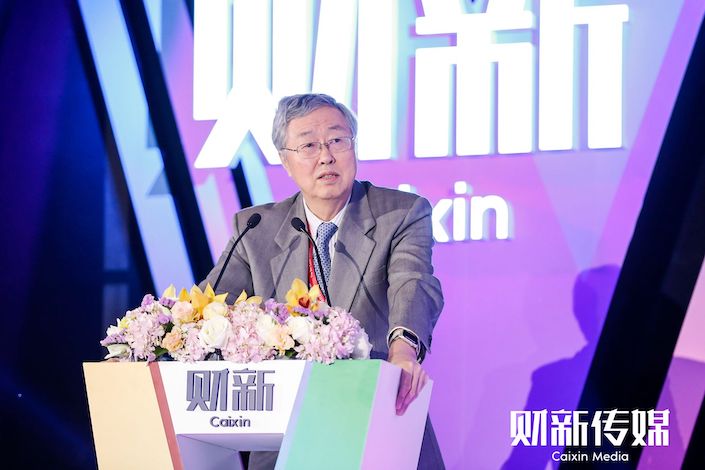 Private companies must have “public spirit” when they help build financial infrastructure, and their activities must be guided and overseen by the government to ensure the stability and safety of the system and protect user privacy, former central bank governor Zhou Xiaochuan said Sunday.

The remarks by the longest-serving governor of the People’s Bank of China (PBOC), who retired in March after 15 years in the position, are seen by some as a signal of authorities’ growing wariness against the expansion of technology giants in the financial industry.

Financial infrastructure, which includes arrangements for functions such as payment, credit scoring, and printing money, has high standards for stability and safety because its failure would have serious consequences for the public, Zhou said at the 9th Caixin Summit in Beijing.

Therefore, while private companies should be given access to financial infrastructure development through avenues such as private-public partnerships with the government, their operations must “be placed under official guidance and supervision,” he said. Zhou still retains immense influence in the country’s financial world and his remarks are regarded by China watchers as reflecting the thinking of regulators.

One of the key qualities private companies must possess in order to be granted access is “public spirit,” he said.

“The private sector must have public spirit if they participate in the building of financial infrastructure,” Zhou said. “That means it should be ready to serve the public and does not intend to take advantage of its role in the construction of financial infrastructure to make excessive gains for itself,” he said, blasting the selling of user data by some companies for profit as showing a “lack of public spirit.”

Martin Chorzempa, a research fellow at the Peterson Institute for International Economics, said what was “really striking” about Zhou’s speech was that it sounded a “cautious note” against making room for private technology companies to provide financial services.

“It’s very much more focused on limiting the space that was previously very, very wide,” he told Caixin after hearing Zhou’s remarks. “In this case we are talking clearer requirements for being involved in building financial infrastructure and making it explicit that this is financial infrastructure that has a public responsibility, that it can’t be a purely private endeavor.”

Zhou also expressed disapproval with the “winner takes all” style of expansion of big companies in the internet industry.

“‘Winner takes all’ goes against our original goal because we hope to encourage development amid competition… so that the best technology can excel and be used by everyone,” he said.

Domestic companies including Alibaba and Tencent and foreign firms such as Amazon are rapidly expanding into the financial industry on the back of their huge user base and payment services. They have big advantages over traditional financial institutions in terms of information, technology and scale, but at the same time have created risks accordingly, she said at a forum.

“Due to the ‘winner-take-all’ nature of the technology industry, the sector may become an oligopoly with the expansion (of the leading companies), which will hinder competition and cause effectiveness of the industry to decline,” she said.

The big firms are actually operating in multiple financial businesses, which increases the risk of their problems being spread across markets and sectors, she added.

“The development of large technology companies and fintech has contributed to innovation in the financial industry. But it has also exposed the sector to credit risks, systemic risks, new information safety risks and unprecedented regulation arbitrage risks. Therefore it is a threat to financial stability,” she said.