By Ren Qiuyu and Qin Ziyi 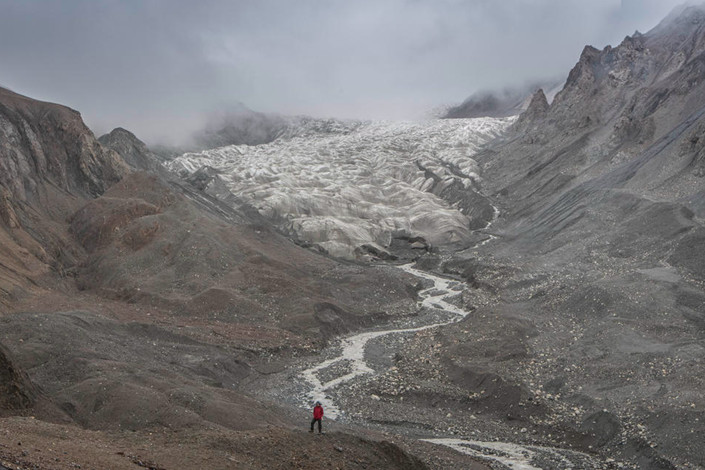 Laohugou Glacier No. 12 is seen in the Qilian Mountains of Gansu province. Photo: Greenpeace

Glaciers in western China are rapidly melting, causing natural disasters and reducing the drinking-water supply, according to new research released by Greenpeace East Asia on Tuesday.

“This is a wake-up call for China and the world,” said Liu Junyan, a climate and energy campaigner with Greenpeace East Asia. “It is critical that we speed up the transition away from coal and other fossil fuels.”

Glaciers in China’s western regions are the source of multiple rivers that supply drinking water to an estimated 1.8 billion people. Known as “Asia’s Water Tower,” it is the largest concentration of freshwater outside the polar regions.

In early October, the United Nations Intergovernmental Panel on Climate Change released an urgent report that highlighted the dire situation of global warming. The report estimated that the world has 12 years to make extreme changes to the global energy infrastructure to limit effects of global warning to moderate levels.

In addition to melting polar ice caps, rising global temperatures have contributed to the melting of the more than 46,000 glaciers in China that form part of the “Third Pole.” According to Greenpeace, temperatures in this area are increasing at a rate that is twice the global average.

Warming temperatures cause snow and ice to melt earlier in the season, causing flooding in spring and a shortage of irrigation water in summer. It can also cause ice avalanches, a result of glaciers melting, creaking and caving, that until recently were considered to be rare occurrences. In 2016, two ice avalanches just months apart occurred in the Tibet autonomous region. “Disasters that previously occurred once in a span of hundreds of years are now more frequent,” said Shen Yongping, a research fellow with the Chinese Academy of Science and contributor to the Greenpeace report, told Caixin.

In August, a glacial lake breached a natural barrier in Xinjiang, releasing 35 million cubic meters (1.24 billion cubic feet) of water into the Yarkant River Basin and leading to evacuations in the area. Last month, an avalanche of ice and glacial debris caused a blockage on the Yarlung Zangbo River in Tibet, creating a 75-meter-deep glacial lake that contained 550 million cubic meters of water at its peak, displacing thousands of people.

Greenpeace East Asia estimates that without serious action to limit climate change, two-thirds of the glaciers in High Mountain Asia — a region that covers the mountain ranges around the Tibetan Plateau — will be gone by the end of the century.