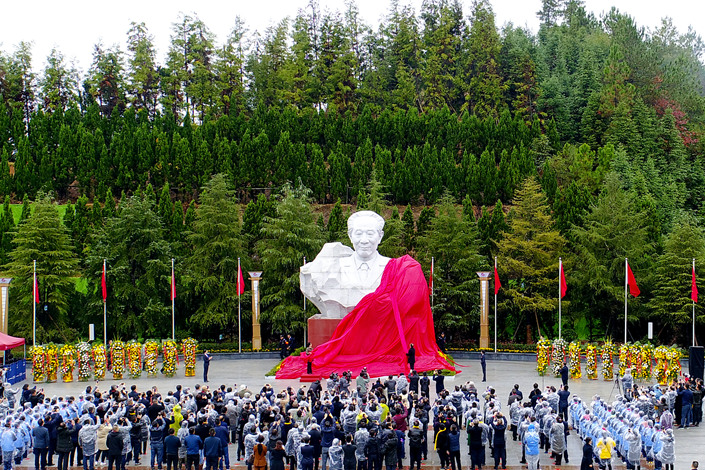 The news was initially reported only by local TV and newspapers. But the new monument in Hu’s hometown, the central Chinese city of Liuyang, has attracted national attention, as Hu has lately been recognized as one of the most important reformists in the party’s history, after he had to resign in 1987 from his top position as party secretary.

The construction of the 6-meter-tall (20-foot-tall) sculpture, which stands in a hillside square, was approved by the central party and government authorities, the report said.

Hu Deping, Hu Yaobang’s oldest son and a former vice chief of the United Front Work Department of the party’s Central Committee, unveiled the statue at the ceremony.

Hu Yaobang is remembered for his work to rehabilitate party and government officials wrongly persecuted during the Cultural Revolution (1966-76). He is also known for initiating public discussion in 1977 over ending the “blind worship” of People’s Republic of China founder Mao Zedong. In the 1980s, when he served as party secretary, Hu spearheaded the country’s reform toward a market economy.

Hu died in April 1989. There was not much official commemoration of him after that year, during which the country experienced major political turmoil. But in 2005, the central party leadership held a meeting to mark the 90th anniversary of his birth.

Commemorations of Hu reached the highest level of government in 2015, when President Xi Jinping touted his efforts during the Cultural Revolution and praised his efforts to push forward the country’s economic reforms.