By Ren Qiuyu and Coco Feng 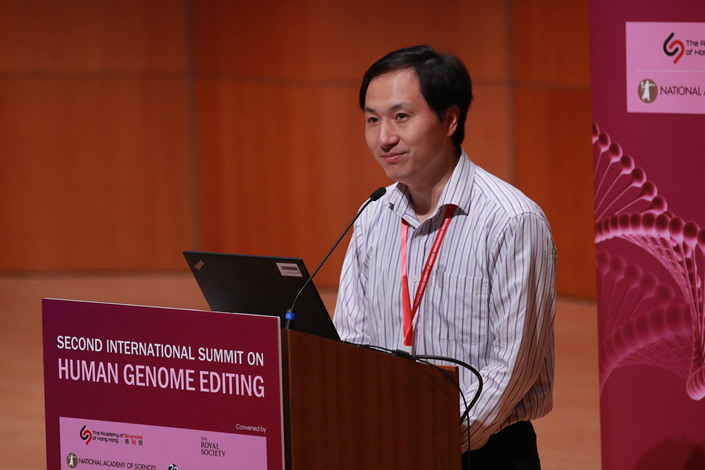 A Chinese scientist said he is “proud” of a controversial experiment in which he claimed to have tinkered with the DNA of twin girls before they were born earlier this month to give them HIV resistance. Speaking at an international genetics conference in Hong Kong, He Jiankui defended his work and told the audience that there may be another pregnancy to follow with an implanted, gene-edited embryo.

The last speaker at a midday session at the International Human Genome Editing Summit at the University of Hong Kong on Wednesday, He took the podium in silence a few tense moments after the moderator introduced him. Standing tall with a confident smile, he thanked the audience and apologized for the “unexpected leak” of news about his controversial experiment — though not for the experiment itself, which was revealed in a report by MIT Technology Review on Sunday.

The controversial experiment aimed to remove a gene from the DNA of two embryos in order to make the babies immune to HIV. Though one attempt was unsuccessful, both babies were supposedly born earlier this month.

The response from the international scientific research community to the announcement has been almost uniformly negative. The experiment itself has not been verified by other scientists or bodies, and murky ethics surround the trial.

He conceded that his university, the Shenzhen-based Southern University of Science and Technology, was unaware of the trial. He said he had started working on the experiment three years ago while still employed by the university, and had used some of its startup funding to pay the costs of DNA sequencing.

He said that twins Lulu and Nana, who have an HIV-positive father, were born normally and remain healthy. The children will be monitored for the next 18 years, he said, “with the hope that they will consent as adults for continued monitoring and support.”

Scientists have pointed out there are simpler and proven methods to protect babies from contracting HIV from their parents. Asked whether the gene-editing procedure was necessary — given the risks and long-term effects of it are unknown — He said children “need this protection,” blaming the stigma faced by HIV-positive people in rural China. “An HIV vaccine is not available.”

During his presentation, He claimed multiple times that the parents had been informed of the risks. “We reminded them of the option to leave the trial without implantation, or to choose the embryos,” he said. “The couple elected to implant this embryo to start a two-embryo pregnancy.”

Members of the audience, which included genome-editing specialists and media, pressed him on the issue of the parents’ awareness of the unknown risks associated with DNA-editing.

“The volunteers were given informed consent, and they already understood quite well about the gene editing technology and the potential effects and benefits,” He said.

“I explained from Page 1 to Page 20, line by line, paragraph by paragraph. And they had the right to ask any question during this informed consent process. Once we went through the entire informed consent, at the end I gave them time for private discussion so that they had some time to discuss it as a couple. They also had the choice to decide to take it home and decide later,” he said.

During the question-and-answer session following his presentation, He confirmed that of the eight couples originally selected to participate in the experiment, only seven had stayed on – and there may be another pregnancy, he said.

He also said “there are at least 30 embryos at blastocyst stage, 70% edited,” but did not elaborate. The blastocyst stage is typically the point at which an embryo is implanted in the uterus during IVF treatment.

He also claimed that the patients were not paid for their participation, but that all medical costs were covered.