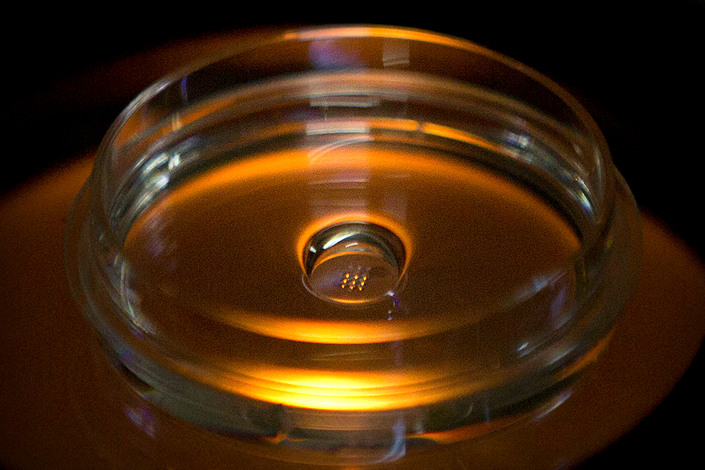 (Bloomberg) — The researcher who shocked the world with claims that he was the first to genetically modify human embryos drew early support from Chinese government initiatives designed to build up the country’s nascent biotechnology industry.

Scientist He Jiankui, who said he edited the genes of twin girls to shield them from HIV, had participated in a program designed to capitalize on training Chinese nationals get at Western universities. Additionally, a company that He founded has received government funding. It isn’t known how much He’s experiments cost or how they were paid for.

While it isn’t uncommon for researchers to have ties to state programs in China, government officials have sought to distance themselves from He after widespread condemnation from other scientists.

A Chinese official said on Tuesday that the country prohibited gene editing for fertility purposes in 2003. In the U.S. and Europe, genetic editing of human embryos is barred.

The news arrived at a sensitive time in Chinese and U.S. relations, with President Donald Trump and President Xi Jinping days away from a pivotal trade summit. China’s efforts to nurture homegrown innovation has chafed U.S. officials, who’ve warned against its talent-recruitment programs and other support for rivals to important engines of the U.S. economy.

The unfolding controversy over He’s research could heighten a battle for global technological dominance between the world’s two largest economies.

The “Thousand Talents” initiative was designed to lure foreign-educated researchers back to China to fulfill Beijing’s broader desire to become a global leader in high-tech fields. He, who received his Ph.D. from Rice University in Houston and did postdoctoral research at Stanford University, returned to China in 2012 and took part in Thousand Talents.

Participants in the program with advanced skills receive the equivalent of about $143,000, with the possibility of additional research grants of roughly $700,000, according to its website. They must work in China for more than nine months per year for three consecutive years. It wasn’t immediately clear how much funding He received.

Following his return to China, He also founded a startup called Direct Genomics that makes a type of DNA-sequencing machine. It too received government funding, according to the company’s website.

China’s biotechnology industry, which lags well behind the U.S. in terms of approved drugs and global market power, has been one of the beneficiaries of Beijing’s generous funding policies and recruitment efforts. A recent regulatory overhaul also has made it much easier to get drugs onto the market in China.

Researchers in China have also become adept at using CRISPR, the gene-editing technology He is reported to have used to alter human embryos. It has many potential applications from agriculture to basic medical research. China is “particularly competitive” in CRISPR, said a November report from the U.S.-China Economic and Security Review Commission, which oversees national-security risks posed by trade with China. The panel’s report highlighted CRISPR’s potential applications in agriculture.

China has made no secret of its ambitions to become a technological superpower in the 21st century. Its “Made in China 2025” blueprint outlines its plans to become a global player in artificial intelligence, robotics, and biomedical research, among other areas.

However, biotech transactions with Chinese investors are likely to face greater scrutiny. In October, the Committee on Foreign Investment in the U.S. announced a pilot program through which the agency would be able to oversee minority-stake investments by foreign entities in certain critical U.S. industries including biotechnology.