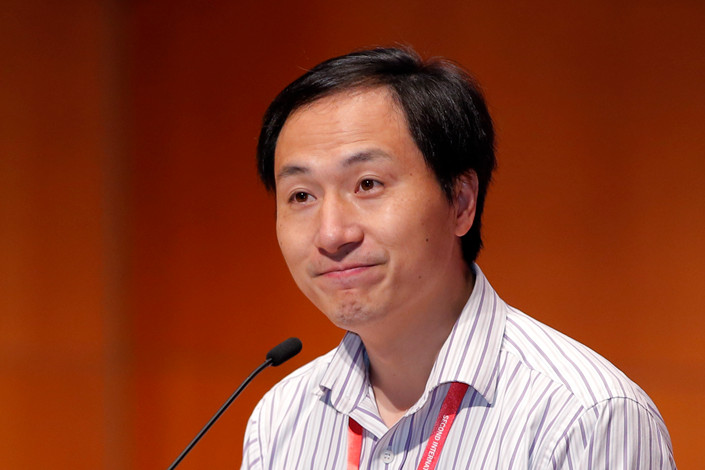 He Jiankui speaks during the Human Genome Editing Conference in Hong Kong on Nov. 28. Photo: IC

The man who claims to be responsible for the world’s first gene-edited human babies defended his controversial work at an international summit in Hong Kong yesterday.

Earlier this week, it was revealed that He Jiankui claimed to have edited the DNA in two human embryos in an attempt to make the resulting babies resistant to HIV. Near-unanimous condemnation from the scientific community followed amid questions over the legality and ethics of the experiment.

Science cannot be done in the dark and needs supervision. Without light and supervision, science can create panic. Editing the human genetic code may be widely accepted by the public in the future and may help humans evolve and go further in the universe. However, at present, no matter how mature gene-editing technology has become or what level of understanding humans have of our own genes, national laws and regulations do not support the development of clinical research on gene-editing in human infants.

Overall, these gene-edited babies are the result of a confused person who has done something illegal. Scientific researchers can only choose a research direction at a university to do work with which they are familiar, and before doing their work, they need to understand the red lines in their field.

So, at today’s meeting, many experts in the field voiced their doubts, which show that all of his colleagues are aware that this is a red line, and no one wants to do work that violates science/technology/ethics. The final question asked if he would do the same to his child. His answer was, if that were the case, he would be the first to do so. This basically shows his ignorance of the subject — or that he’s deceiving everyone.

In today’s question and answer session, I asked why there is a consensus on the prohibition of editing human embryos not only internationally but also in the Chinese scientific research community. With this knowledge, why intentionally cross a red line? And if he was unaware, why secretly engage in such clinical trials?

He Jiankui gave a vague response, saying that he had asked clinical and ethics experts at different conferences three years ago, and perhaps he could try clinical trials of genetic editing, so he did this experiment (privately).

Another issue concerns the technology He Jiankui said he used. According to the report, He used single-cell whole-genome sequencing technology (to determine what changes were made to the babies’ DNA). In my opinion, and from a technical point of view, single-cell whole genome sequencing technology is still in its early stages and cannot be used to get accurate whole genome sequences. It was unreliable for He to use this technique to verify whether the embryo he edited missed the target.

From an ethical point of view, gene-editing of human germ cells is explicitly prohibited, which is a consensus reached by the international community. Throughout the whole question-and-answer session, He avoided questions and only talked about his feelings.

Gene-editing technology has been widely used in genome modification of many species except human beings, and could have a revolutionary impact on human life, improving human health and increasingly longevity.

However, due to the high miss rate and insufficient target efficiency, gene-editing technology cannot be directly applied to changing humans. There is a consensus in the academic world and in society that genetic modification of implanted embryos is explicitly prohibited through various laws and provisions. This valuable scientific research on gene-editing in embryos will answer myriad unanswered questions on the particulars of the effects of off-targeting, side effects, and benefits and will provide the technical basis for future humans to repair and modify their own genes.

In light of this experiment, which has trampled through ethical baselines, it is hoped that the administrative departments will prohibit what should be prohibited no matter where it happens, and that the scientific research on embryos can be encouraged as always and not wasted.

At present, the opinions of academics and the public at home and abroad are basically the same. This work was not necessary, there was no technical breakthrough, only the ethical challenge and the potential harm to twin babies. We need to reflect on how such a study could avoid all current regulations. Who were the specific sources of funding and support? How does the accountability process unfold? Who is responsible for the health problems the twins may have? What do proper arrangements for other pregnant patients entail?

In other words, the final result of the investigation is the same as the Han Chunyu incident. Subjectively, if there is no malice, do we just leave it unsolved? (Editor’s note: Han Chunyu’s thesis, which claimed to have discovered a more efficient and precise genome-editing technique than CRISPR — the tool which He Jiankui claims to have used for his experiment — was retracted earlier this year.)

A previous version of this story incorrectly stated that Caixin was at the event to interview researchers.