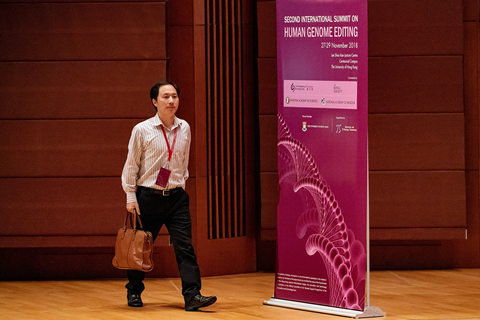 The controversy surrounding the world’s first gene-edited human babies has put He Jiankui, the Chinese scientist behind the claims, and companies and investors linked to him under the spotlight.

He claims to have altered the genes of twin Chinese babies’ embryos to make them resistant to HIV. The scientist is also the founder of two biotech start-ups whose investors are linked to the so-called Putian Group of more than 8,000 private hospitals. One of those hospitals was where a college student received an experimental cancer treatment and died in 2016.

The Putian Group hospitals are run by families originally from the Fujian province village of Putian, but they aren’t formally organized as a corporation.

Vienomics Biotech, which He chairs and controls, raised 50 million yuan ($7.2 million) earlier this month in a Series A funding round led by Amer International Group and Qianjiang Capital.

Amer International, a Chinese industrial conglomerate in the copper industry, also participated in a Pre-A round of funding in Direct Genomics in 2014. The amount of the investment wasn’t disclosed.

Public records show that Lin Zhitong, Amer International’s vice president for medical business and the holder of a 10% stake in an investment subsidiary of Amer, was also a director of Direct Genomics.

Lin owns a 0.83% stake in Harmonicare Medical Holding Co., a Hong Kong-listed hospital operator that is part of the Putian network. He also owns an 8% stake in Shenzhen Harmonicare Women and Children’s Hospital, where the controversial gene-editing project was reportedly carried out, although the hospital has denied any connection to He and his work.

An Associate Press report quoted Lin, who is also a Harmonicare administrator who heads the ethics panel, as saying the gene editing trial was “ethical.”

In 2016, 21-year-old college student Wei Zexi died of cancer after receiving an experimental treatment from a Putian-run hospital. Wei learned of the treatment from a promoted result on the Chinese search engine Baidu. The incident provoked a public outcry over Baidu’s practice of accepting bids for rankings on medical information searches. It gave Putian hospitals a reputation for pushing questionable treatments.

There’s no publicly available information indicating whether Lin Zhitong is part of the Lin family that controls many Putian hospitals. But business records show that Lin Zhitong is a shareholder of an offshore company, Honeycare International Investment Ltd., registered in 2014 to hold stakes in Harmonicare. Other shareholders of the company include Harmonicare Chairman Lin Yuming’s brothers and other family members.