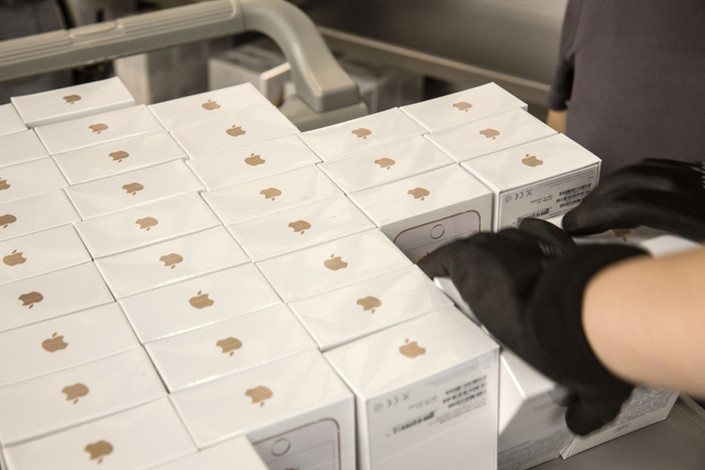 Qualcomm wants to force Apple to the negotiating table in what it says is a commercial dispute. Photo: Bloomberg

(Bloomberg) — Qualcomm Inc. said it won a ruling in China against Apple Inc. that bans the sale of several iPhone models in that country.

The Fuzhou Intermediate People’s Court ruled that Apple is infringing two Qualcomm patents and issued injunctions against the sale of the iPhone 6S, iPhone 6S Plus, iPhone 7, iPhone 7 Plus, iPhone 8, iPhone 8 Plus and iPhone X, the San Diego, California-based chipmaker said in a statement Monday. The most recent models introduced in September, the iPhone XS, XR and XS Max, are not covered by the ban.

The ruling could potentially affect iPhone sales in the world’s biggest market for smartphones, where the company generates about a fifth of its revenue, and comes at time when demand for Apple’s most important product is slowing.

The two U.S. companies are locked in a worldwide dispute over licensing fees that Qualcomm charges for use of technology that the chipmaker says underpins all modern phone systems. Apple has argued that its former supplier unfairly leverages its position as the biggest supplier of chips for smartphones to force payment of the fees. Qualcomm has countered that Apple is using its intellectual property without paying for it and the legal cases are aimed at forcing it to lower licensing charges.

“Apple continues to benefit from our intellectual property while refusing to compensate us,” Don Rosenberg, executive vice president and general counsel at Qualcomm, said in a statement. “These court orders are further confirmation of the strength of Qualcomm’s vast patent portfolio.”

“Qualcomm’s effort to ban our products is another desperate move by a company whose illegal practices are under investigation by regulators around the world,” Apple said in a statement. “All iPhone models remain available for our customers in China.” Later on Monday, Apple said it filed a request for reconsideration with the court, the first step in appealing the preliminary injunction. The request was previously reported by CNBC.

The patents are related to adjusting and reformatting the size and appearance of photographs and managing applications using a touch screen, Qualcomm said. They are just two of a number of patents Qualcomm is using against Apple in disputes in several countries.

Aaron Rakers, an analyst at Wells Fargo Securities, said he doesn’t think Apple will be much affected by the ruling, since it doesn’t cover the most recent phones, which come pre-loaded with the current operating system, iOS 12, and that doesn’t violate the patents in question. Still, Rakers said Apple faces risks from the developing trade war between the U.S. and China. China accounts for about 18% of iPhone shipments, Rakers said, citing data from IDC.

Qualcomm wants to force Apple to the negotiating table in what it says is a commercial dispute. The iPhone-maker has stopped paying licensing fees, Qualcomm’s largest source of profit, and no longer uses Qualcomm chips. That’s cost Qualcomm billions in revenue and the company has reported shrinking sales since 2014.

Apple and one other unnamed company are the only major phone makers that do not pay Qualcomm licensing fees. Qualcomm charges a percentage of the selling price of each handset sold regardless of whether the device is based on its chips or not. Apple contends that Qualcomm’s fee should be based on the price of the component, not the phone, a difference of hundreds of dollars per phone.

Even amid disputes and non-payments, the fees provided Qualcomm with more than half of its profit last year.

Apple is likely to ask a federal court in California to prevent Qualcomm from enforcing the ban until the overall royalty dispute is resolved. That’s what Samsung Electronics Co. successfully did when Huawei won an order blocking Samsung from making or selling smartphones in China. The U.S. judge in that case said an order in China would “render meaningless” the contract dispute he is considering.

While a U.S. court has no jurisdiction over a court in China, American judges have issued orders that limited parties from acting on cases in other countries. Usually it comes down to whether a company is willing to defy a judge presiding in the world’s largest economy.

Qualcomm intends to seek enforcement of the Chinese ruling in the court system there, the chipmaker said in a follow-up statement. The injunction orders are in effect now and aren’t specific to which version of the operating system is installed on the phones.

An appeals court in Washington is considering whether the judge has that type of authority. Arguments were heard Dec. 3 and it could be several months before a decision is announced in that case.