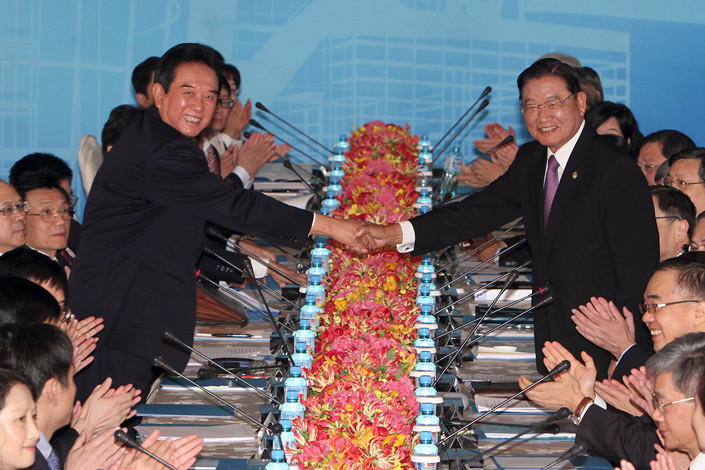 Taiwan’s former top negotiator with the Chinese mainland Chiang Pin-kung died at the age of 85 in Taipei on Monday from multiple organ failure, local media reported.

Chiang shaped the resumption of high-level cross-strait contact from 2008 to 2012 as chairman of the Straits Exchange Foundation (SEF), the organization set up by Taiwan to handle business with the Chinese mainland. Ma Ying-jeou, former Taiwan leader and ex-Kuomintang party chairman, reportedly visited Chiang in the hospital Monday to say goodbye.

Chiang, who was elected vice-chairman of the Kuomintang in 2003, led a historic official visit by Kuomintang representatives to Beijing in 2005, the first visit by representatives of China’s former ruling party since the Communist Party took power in 1949.

Prior to this, he led Taiwan’s economic affairs department from 1993 to 1996. During this time, he advocated closer economic ties with the Chinese mainland, including the opening-up of direct cross-strait flights. But relations between Taiwan and the mainland remained strained in the 1990s and until 2008, during the tenure of pro-independence leader Lee Teng-hui as the island’s top official, as well as under Lee’s successor Chen Shui-bian.

The 2008 election of Ma Ying-jeou, who had a more conciliatory stance toward the mainland, marked a turning point in Chiang’s career. That year, Chiang led negotiations with Chen Yunlin, then president of the mainland’s Association for Relations Across the Taiwan Straits.

Chen’s visit to Taipei in November 2008 triggered mass protests, with pro-Taiwan independence demonstrators trapping Chiang and Chen at a banquet in a hotel for eight hours one evening. The Chiang-Chen meeting also laid the groundwork for a cross-strait economic cooperation framework agreement that was signed in 2010.

In 2009, Caixin interviewed Chiang, who said the cross-strait relationship was crucial to Taiwan’s dealings with other markets. “Taiwan has previously tried to sign free trade agreements with Japan, the U.S. and Singapore, but everyone would take into consideration the mainland’s political stance,” Chiang said. “So, as long as the mainland takes the first step with Taiwan, other countries’ hesitations will be dispelled.”