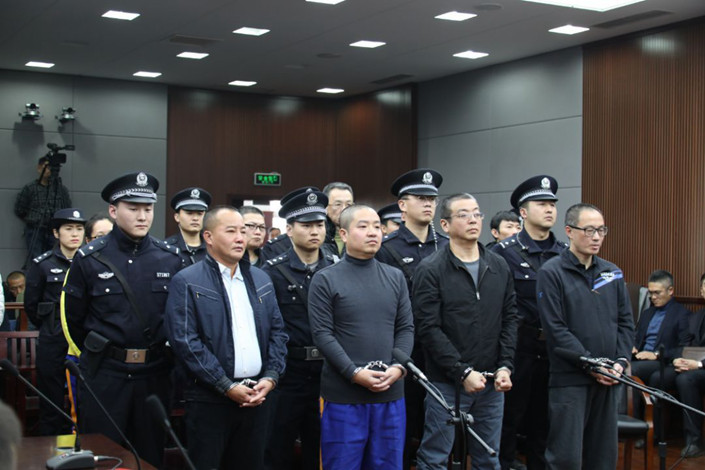 A court in East China has sentenced the founder of Dezheng Resources Holding Co. Ltd. to 23 years in prison and fined the aluminum company 3.012 billion yuan ($436.57 million) over a case of fraud that lost banks billions, shook international commodity markets and deeply damaged confidence in China’s warehouses four years ago.

The Qingdao Intermediate Court found Chen Jihong and several of his top staff guilty of forging and duplicating receipts for the company’s inventory of aluminum ingots, alumina and copper it had stored at the ports of Qingdao and Penglai. Between 2012 and 2014 Dezheng used the duplicated receipts as collateral for bank loans, securing financing on the back of metals it did not have, according to a report in the official Legal Daily (link in Chinese).

It is not uncommon for Chinese companies to use commodities stored in warehouses as collateral for loans from banks, experts say, although the use of warehouse receipts as proof has declined since the Dezheng Resources scandal.

The company duplicated the receipts and then put them up as collateral for loans totaling roughly 12.3 billion yuan from at least 18 Chinese banks or financial institutions and six foreign banks. British bank Standard Chartered PLC had an exposure of around $250 million, with France’s BNP Paribas SA and the U.S.’s Citibank also exposed. The loans were mostly used to finance the company’s existing debts, the Legal Daily reported.

The company’s fraudulent behavior came to light in 2014 when Citic Resources Holding Ltd., a subsidiary of one of China’s biggest state-owned enterprises, reported that it was unable to locate more than 100,000 metric tons of alumina that was supposed to be stored at the Qingdao port. It then asked the port to stop alumina and copper from leaving, causing other companies with supplies based there to panic and try to move them to other ports.

“A lot of our clients are worried about any impact,” said a manager at one warehousing firm in Qingdao. “They are taking copper to South Korea or Shanghai, also Japan, because they are afraid it could be seized,” a manager at a warehouse firm told the Financial Times as the scandal broke in June 2014.

The news caused panic across commodity markets as traders worried about whether reported resources were in fact there and banks worried that they had lent on the basis of fraudulent warehouse receipts.

The incident did lasting damage, wrote Gloria Pasadilla, an expert in global services at the APEC, as it “shattered confidence” in China’s warehousing and collateral management capacity. “After the Qingdao Metals Case, some creditors shifted the location of their metal inventories to other warehouse locations in Hong Kong, China; Korea and Chinese Taipei,” she said.

A Singapore-based industry analyst told Caixin that such fraud became common in the ferrous and nonferrous markets between 2012 and 2015, as both industries “were in deep holes of loss-making.”

“Double selling would occur for investors to get extra funding as the last resort. Such behavior would be unsettling to the markets, putting all the traders on tip-toes, and some end-users with the warehousing warrants discovered the nasty fact that they could not get hold of the materials with all their seemingly legitimate documentation,” she added.

This at least brought about changes in the industry, although confidence remains damaged. Regulation has been enhanced, the analyst said.

“Such wrongdoing has become rather rare now with a more orderly market both because of the tighter control as well as the reshuffling of market participants after the traumatic years,” she said.

The Qingdao court sentenced nine other staff members to ten-year prison sentences and ordered that the company’s assets be auctioned off with the proceeds going to compensating the many who lost out financially in the scam.