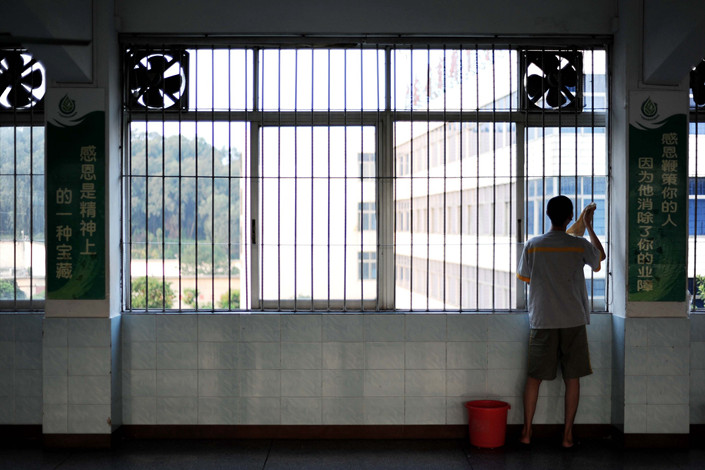 An inmate at a juvenile detention facility performs cleaning duties in Guangdong province in 2013. Photo: VCG

A 12-year-old who had been detained for killing his mother has since been released by police in Central China’s Hunan province, sparking debate over the country’s handling of juvenile crime cases.

Police found the boy’s 34-year-old mother dead with multiple knife wounds in her home on Dec. 3, Yuanjiang county media reported (link in Chinese). The boy, surnamed Wu, told police he had stabbed his mother the previous evening out of anger after she hit him.

Caixin learned Wednesday that Wu has been released without charges because he was younger than 14, the minimum age for being charged with a crime in China. The boy’s relatives have also said they intend to send him back to the school he was attending before his detention, prompting an outcry from parents of other children at the school.

The seeming lack of consequences for Wu has catapulted his case from small-town crime story to the subject of national attention. Publications like Legal Daily (link in Chinese) and the official Xinhua News Agency focused (link in Chinese) on Wu’s lack of remorse — he reportedly defended his actions by saying, “But I didn’t kill other people, I only killed my mother.”

China revised its Criminal Procedure Law in 2012 to shift the emphasis away from punishment toward education and rehabilitation for underage offenders. But because of loopholes and inadequate provisions in the law, Wu faces neither punishment nor rehabilitation after killing his mother.

Because Wu has been deemed too young for criminal responsibility and thus hasn’t been charged with a crime, he isn’t eligible for admission to one of the country’s juvenile detention facilities, Pi Yijun, a specialist in juvenile delinquency at the China University of Political Science and Law, told Caixin.

At the same time, Wu’s action was too serious for him to be sent to a reform school, as these institutions in China accept only underage students who have committed minor infractions, Pi said.

Wu’s case isn’t the first to fall through the cracks of China’s legal system in recent years. In a similar case in March (link in Chinese), a 13-year-old boy in Central China’s Hubei province robbed and forced a female classmate to strip, then stabbed her multiple times, Chinese media reported. But police dropped their case against him because he was not yet 14, the age of criminal responsibility.

Even though the number of crimes committed by Chinese schoolchildren has fallen in recent years, violence by minors — not all of it considered criminal under Chinese law — is still seen as a serious problem in the country.

According to the law, Wu should be sent for “re-education through custody,” a third, vaguely described form of rehabilitation for children in Wu’s situation. But “there is no system, and there are especially few institutional provisions” for this kind of rehabilitation, and the few that exist are concentrated in major cities, Pi said. “That’s why in a large number of cases, the police have no alternative but to return these underage children to society.”

“The law doesn’t provide clear provisions in this area, and only says that re-education through custody must be used when necessary,” Song Yinghui, a professor of criminal law at Beijing Normal University, told Caixin. “It’s not clear what the procedures, education methods, and staffing arrangements should be for re-education through custody, so in practice it is very rarely used.”