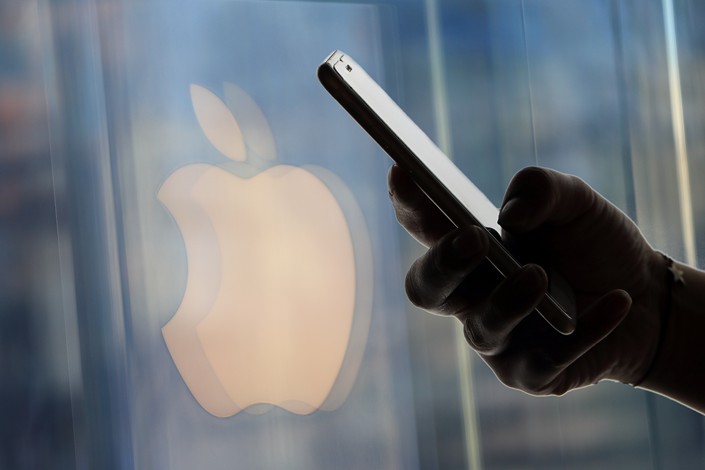 A Chinese court ruled this week that Apple infringed on two Qualcomm patents and issued injunctions against the domestic sale of six older versions of the iPhone. Photo: IC

(Bloomberg) — Apple Inc. says a Chinese ban on sales of the iPhone will force it to settle a long and bitter licensing battle with Qualcomm Inc., an outcome that may end up harming the country’s smartphone industry and consumers around the world.

The U.S. company was responding to a Chinese court that ruled this week Apple infringed two Qualcomm patents and issued injunctions against the sale of six older versions of the iPhone. Apple, which has filed a request for consideration, argues the decision harms China’s interests by potentially raising the royalties and fees that phone-makers pay Qualcomm.

The ruling from a local court — which came as Washington and Beijing are locked in sensitive trade negotiations — pivoted the battle over patent fees to the world’s largest mobile arena. Apple’s response underscores the importance of the Chinese market, as well as Qualcomm’s crucial role as a technology provider to the likes of Huawei Technologies Co. Ltd. and Xiaomi Corp.

“Apple will be forced to settle with the Respondent, causing all mobile phone manufacturers to relapse into the previous unreasonable charging mode and pay high licensing fees, resulting in unrecoverable losses in the downstream market of mobile phones,” the iPhone-maker said in the Dec. 10 filing to the court. The document was submitted in Chinese with an English translation that Bloomberg verified. Apple didn’t respond to requests for comment.

In a separate but related development, Qualcomm was trying to further turn up the pressure on Apple by asking the Chinese courts to ban sales of the latest iPhone XS and XR, the Financial Times reported. A lawyer representing Qualcomm said the company planned to use the same patents from the earlier successful lawsuit to seek similar bans against Apple’s newest models.

The lawyer said that similar lawsuits aimed at Apple’s latest XS, XS Max and XR models were pending in courts in Beijing, the Financial Times reported.

The two U.S. companies are locked in a worldwide dispute over licensing fees that Qualcomm charges for use of technology that the chipmaker says underpins all modern phone systems. Apple has argued its former supplier unfairly leverages its position as the biggest supplier of chips for smartphones to force payment. Qualcomm has countered that Apple is using its intellectual property without paying for it, and the legal cases are aimed at forcing it to lower licensing charges.

Like Apple, Chinese smartphone-makers had argued for years that Qualcomm — which owns a swathe of patents essential to modern wireless communications — is abusing its position and levying punitive fees. Most have since struck an agreement with the U.S. company. Qualcomm successfully argued to the Chinese government its intellectual property coverage would protect those handset-makers, allowing them to penetrate overseas markets.

Now, Apple is saying China’s latest ruling could influence a broader global conflict. While iPhones remain on store shelves pending a decision on Apple’s appeal, a negative outcome could affect its sales in the world’s biggest market for smartphones, where the company generates about a fifth of its revenue. And it will come at a time when demand for Apple’s most important product is slowing.

“This legal response back to the Chinese courts highlights the potential seriousness of this ruling for Apple. It’s all a game of high-stakes poker and Apple is going to fight this Qualcomm case with an iron fist,” said Daniel Ives, an analyst at Wedbush. “A settlement would be the last resort but losing this appeal would be another gut punch for Apple and potentially force their hand.”

China is also the production base for most iPhones as well as the iPad and Mac. Apple warned that the ban would hurt manufacturers like Hon Hai Precision Industry Co. Ltd. —known also as Foxconn — and other suppliers. A ban would cost Apple millions of dollars a day and affect both the Chinese government and consumers, the company added, noting it has created 5 million jobs across the country’s supply chain and third-party software developers.

“Apple and many other companies, consumers, and government will suffer truly irreparable harm,” the company said in the filing. The Chinese government “may suffer hundreds of thousands of tax losses” from the iPhone ban because of lost taxes from sales of the devices, it said, citing estimates of 50 million units sold in the country in 2017.

Qualcomm has also brought patent suits in China and other jurisdictions, seeking bans on the sale of iPhones to force Apple to the negotiating table.

In addition to the Chinese case, it’s filed complaints against Apple in Munich and Mannheim, Germany, and lodged another one with the U.S. International Trade Commission in Washington. All three venues offer it the chance — if successful — to shut down or limit the sale of the iPhone, a product that generates the majority of Apple’s revenue.

“This is what Qualcomm needed to get some leverage to try to get Apple to finalize a deal,” said Mike Walkley at Canaccord Genuity LLC.