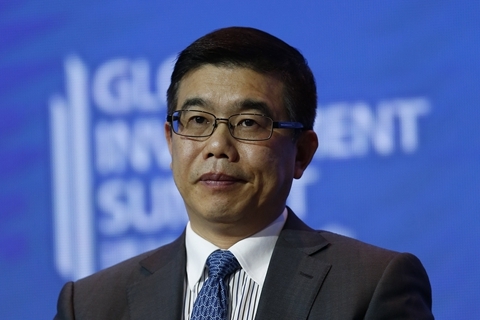 The fund will also help companies to export technologies and products to foreign markets backed by the mass-production capacity of Guangzhou and Shenzhen, Hu added.

Details about the fund and its potential investors haven’t been disclosed, but the launch ceremony attracted many senior government officials and prominent business executives from the mainland and Hong Kong, signaling the fund’s significance.

Hu served for nearly 10 years as CEO at CCB International (Holdings) Ltd., the investment arm of one of the big four Chinese state-owned banks. He is also the chairman of the Chinese Financial Association of Hong Kong, with close relations with the central and Hong Kong governments.

The idea to create the Greater Bay Area was first raised in 2009 by the local governments of Hong Kong, Macau and Guangdong province, aiming to capitalize on the region’s already strong finance, manufacturing and technology capabilities to build an economic and innovation hub that could eclipse the San Francisco Bay area, Greater New York and the Greater Tokyo area.

Hong Kong, Macau and the nine cities of Guangdong ― Guangzhou, Shenzhen, Zhuhai, Foshan, Zhongshan, Dongguan, Huizhou, Jiangmen and Zhaoqing ― signed an agreement on the development of the Greater Bay Area on July 1, 2017. It was the 20th anniversary of Hong Kong’s return to China’s jurisdiction on the expiration of a 99-year lease to Great Britain.

The area, encompassing 68 million people and 56,000 square kilometers, includes some of China’s most dynamic cities, home to the country’s manufacturing base and tens of thousands of high-tech companies. Last year, the economic aggregate of the Greater Bay Area reached nearly 10% of China’s economy.

The area is already accelerating its integration. Hong Kong-Zhuhai-Macau Bridge, a 55-kilometer sea bridge connecting the three cities, opened in October. Alongside the bridge, a new high-speed rail line opened to the public in September. It’s the first high-speed rail connecting Hong Kong to the mainland with bullet trains.

The new fund will also actively participate in infrastructure construction and other development projects in the area, Hu said.