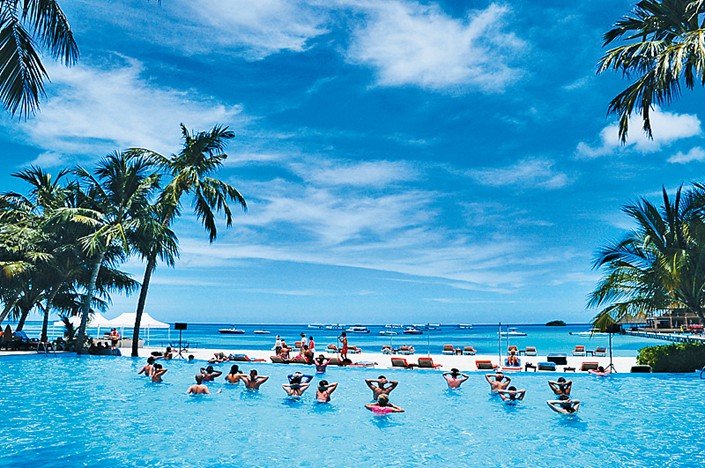 The Club Med Kani Resort in the Maldives. Photo: VCG

After previously pricing at the bottom of their IPO range, Fosun Tourism shares ended their first day about 4% lower, after trading down by as much as 7.6% during the session. The company is a unit of Fosun Group, one of China’s best known private equity companies that has embarked on a global buying spree in recent years for mostly financial and medical assets.

Following a recent clampdown by Beijing on conglomerates with too much debt, Fosun has been trying to pay off some of the debt from its buying spree by selling some assets and raising money from IPOs for others. It raised HK$3.34 billion ($427 million) from the Fosun Tourism IPO, which followed a similar-sized fund-raising in September when it spun off its Israeli laser-making Sisram Medical Ltd. unit in another Hong Kong IPO.

Fosun acquired a majority stake in Club Med in 2015, following a two-year bidding war for the French operator of popular vacation resorts, in a deal that valued the company at about 940 million euros ($1.1 billion). Fosun Tourism now owns about 82% of the French resort operator, according to its IPO prospectus.

That same prospectus showed the company has been losing money since at least 2015, including a 135 million yuan ($20 million) loss in the first half of this year, which narrowed from a 189 million yuan loss in the same period a year earlier. Its revenue growth has been slowing steadily over the last three years. The company’s revenue grew just 7.8% to 6.7 billion yuan in the first six months of this year, slower than the growth rate for the previous two years.

At the time of the Club Med purchase, one of Fosun’s chief strategies was to bring the famous resorts to its home China market to take advantage of the country’s rapidly growing demand for high-quality vacation destinations. Club Med now operates six resorts in China, which has become its second-largest market after its base in France. China accounted for 7.6% of the company’s revenue in the first half of this year, double the 3.6% of revenue it accounted for a year earlier.