Australia Is Navigating a Diplomatic Course Between China and the U.S. 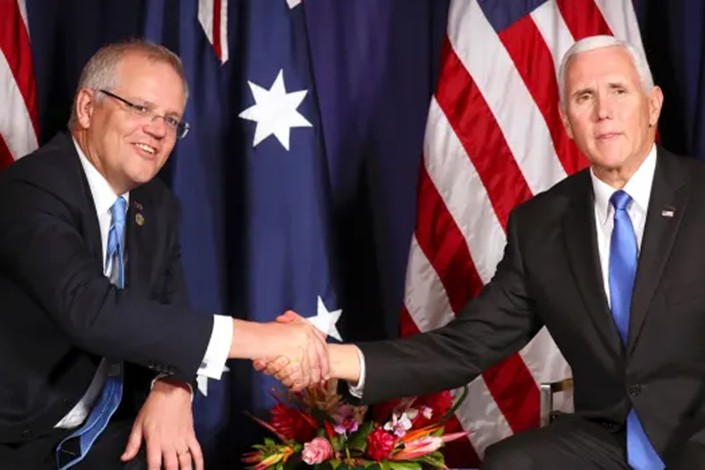 One feature of the Australian government's 2017 Foreign Policy White Paper was the balance struck between tough talk on China's challenge to U.S. hegemony in Asia and the message that regional military modernization posed no threat to Australia. Despite the dysfunction roiling Australian politics since then, this judgment still holds.

Both the current Morrison government and the Labor Party opposition are showing signs of finding a strategic path through this era of sturm und drang.

They know that keeping faith with the American alliance requires skepticism towards aspects of President Trump's foreign policy, and that the United States is being tested in Asia as never before. They know, too, that despite Trump's warmth towards Prime Minister Morrison at the recent G-20 Summit — where he channeled Vietnam-era rhetoric by saying that “we will be with Australia all the way” — that America's words do not convey the gravitas of old. Accordingly, political leaders in Canberra have rediscovered the tradition of asserting, where necessary, greater self-reliance within the alliance.

Of course, this is what Washington seeks. But it would also prefer Canberra was more forthcoming in pushing back against China, particularly via freedom of navigation operations in the South China Sea. Forget the “mateship” mantra: there are hardliners in Washington scratching their heads at Australia's China policy.

Both parties also know that it serves no purpose to play domestic politics with the China relationship. Whatever the legitimate concerns over foreign interference in Australia's political system or the protection of critical national infrastructure, little is gained from reviving the invasion scare literature of the 1890s.

A consequence of all this is that a gap is opening up between the pragmatism of the government and the opposition on the one hand, and a stubborn hawkishness among some in parts of the Australian commentariat on the other.

One of the greatest ironies of recent months lies in the implicit rejection by both Australian parties of the White House's increasingly belligerent stance on China, encapsulated in Vice-President Mike Pence's remarks in early October. Widely heralded by a host of eminent Australian academics and commentators as the inauguration of Cold War 2.0, Australian politicians have wisely looked askance at this U.S. crusade.

Morrison argued strongly that U.S.-China relations should not be “defined by confrontation” and went on to reject a Cold War billing for his so-called “Pacific Pivot.” Labor Party leader Bill Shorten was similarly emphatic that “pre-emptively framing China as a strategic threat” was unhelpful.

Recall that amid the chaos of Trump's first months in office, former Australian foreign minister Julie Bishop had often called for the return of Cold War-style U.S. leadership that had founded and led the “rules-based order.” Yet when this rhetorical dimension of American leadership resurfaces, neither the government nor the opposition, or any key U.S. regional ally, has lined up to parrot the American script.

For all the legitimate concerns about increasingly aggressive Chinese economic and strategic statecraft, it seems no U.S. allies want to be shoe-horned into a new Cold War. Some hawks in Canberra have clearly forgotten the statement on China from last year's U.S. National Security Strategy, that “competition does not always mean hostility.”

Pence repeated it in October, as has, more recently, Secretary of Defense Jim Mattis. The question, too, is whether there is the political and popular will in the United States for a long twilight struggle with Beijing.

The Morrison government does remain intent on sending China a message about its own regional resolve. With Beijing's Pacific diplomacy in mind, it announced help for the Papua New Guinea government to develop a naval base on Manus Island.

The precise nature of U.S. involvement is not yet known, but they are supportive. The risk here is that we have now associated the Manus base with a struggle for which the U.S. is not equipped and which it is perhaps not even motivated to win. Another risk is that such a move undermines Australia's own calls for China to resist from militarizing the Pacific.

At the same time, Australian Trade Minister Simon Birmingham insists that the U.S. should not be surprised that Australia may be willing to co-fund infrastructure projects with China as part of its Belt and Road Initiative. This comes when Canberra is also discussing a rival infrastructure initiative with the United States and Japan.

Elsewhere the government is not aping Washington hardliners on China. While Canberra has expressed “alarm” at reports of the mass detention of ethnic Uygurs and other Muslim groups in Xinjiang — with Morrison saying he will not “showboat” on human rights issues — some in the U.S. Congress are pushing for the imposition of sanctions. And earlier in 2018, while Washington rescinded an invitation to China to participate in RIMPAC (Rim of the Pacific) Exercises in response to bomber landing drills in the South China Sea, Australia didn't disinvite Beijing from participating in Exercise Kakadu for the first time.

If elected in 2019, Labor is unlikely to depart significantly from these settings on Australia's relationships with the United States and China. But it too will have internal debates over how to navigate through the choices thrown up by intense geopolitical rivalry.

It would do well to continue ignoring the trumpet-sounding and drum-beating in sections of the Australian commentariat who show signs of slipping into the tired clichés of a world that passed away nearly 30 years ago.

James Curran is professor of modern history at University of Sydney and Non-Resident Fellow at the Lowy Institute.