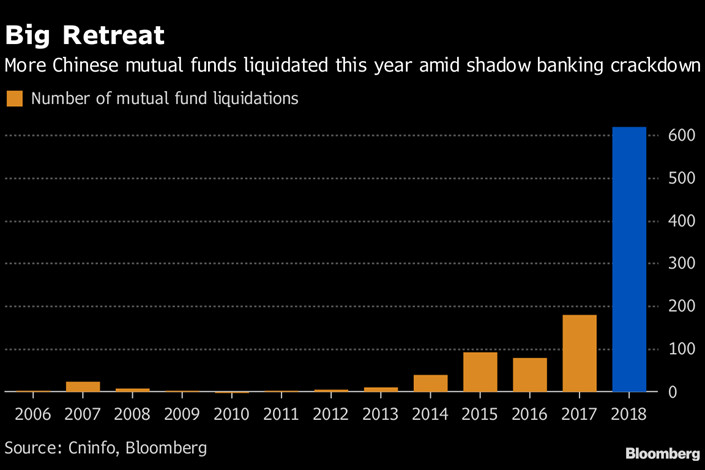 (Bloomberg) — China’s cleanup of its shadow banking system is fueling a record number of liquidations in its $1.9 trillion mutual fund market.

More than 600 funds have been closed this year, surpassing all liquidations in the previous 12 years combined, data compiled by Bloomberg show. It’s also more than triple the total last year, representing a sharp rise in closures for a mutual fund market that has grown more than five-fold since 2011 in assets under management.

China’s crackdown on entrusted loans, the No. 2 source of shadow banking, as well as an ailing stock market have contributed to the record liquidations, according to analysts from Morningstar (Shenzhen) Ltd. and Z-Ben Advisors Ltd. China’s stock market is headed for its worst year since 2011, with the Shanghai Composite Index down more than 20% year to date.

“A lot of the mixed allocation funds are quite flexible in investments and favored by entrusted loans, so the crackdown on such loans led to closure of related funds,” Morningstar analyst Huang Wei wrote in emailed comments.

More than half of this year’s tally came from liquidations of mixed allocation funds, followed by 206 in fixed income and 72 in equity, Bloomberg compiled data show.

Tougher regulation of “mini funds” which had less than 50 million yuan ($7.2 million) of assets under management, also quickened the pace of liquidations, according to Liu Shichen, an analyst with Z-Ben Advisors.

“It’s not worth maintaining the funds in a down market given operational costs,” Liu said. “Some fund houses may also choose to exit the mini funds to issue new products.”