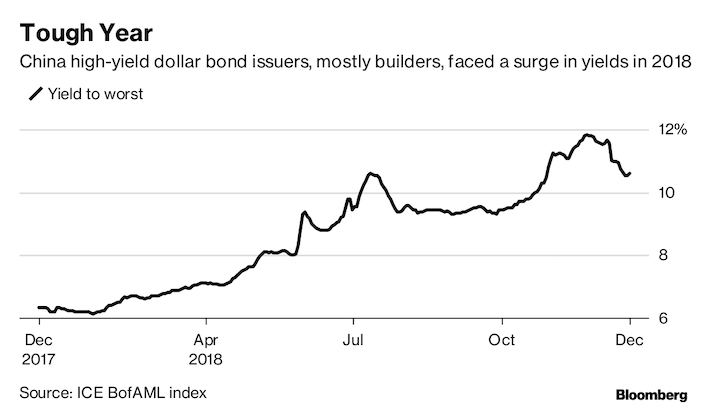 With just less than two weeks before the year is out, Chinese developers grappling with heavy refinancing needs are making last-ditch efforts to clinch funds by paying sky-high costs.

Beijing-based Modern Land China Co. is marketing a 1.5-year dollar bond at a guidance of 15.5 percent, according to a person familiar with the offering. If done, that would be the highest coupon among public deals in Asia this year, topping the 15 percent coupon paid by Shenzhen-based builder Fantasia Holdings Group Co. last week on its three-year note.

Thinner liquidity near the end of 2018 and pressure to repay maturing debt are forcing issuers to stomach elevated costs for short-term financing, sacrificing profit margins down the road. Chinese builders have 600 billion yuan ($87 billion) of local bonds maturing or becoming puttable next year, as well as $17.1 billion dollar notes due, adding repayment strains on smaller peers.

“You have increasingly smallish developers willing to pay exorbitant rates with a short maturity these days,” said Todd Schubert, head of fixed-income research at Bank of Singapore. “Liquidity is tighter onshore for developers not in the upper tier and with the potential for an expanding trade war and further rate hikes, they may believe that funding costs could be even higher if they wait until next year."