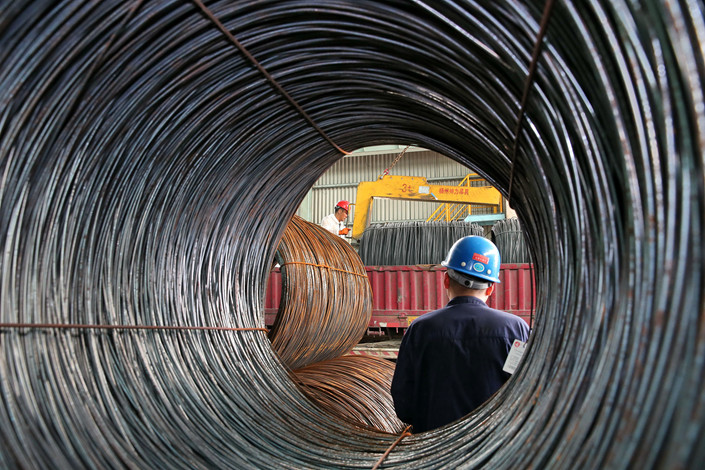 The workshop of a steel business is seen in Nantong, Jiangsu province, on July 3. Photo: VCG

The industry ministry announced that it will strike the names of 11 steel firms from its list of qualified producers — effectively shutting them down — and threatened another 17 enterprises with the same fate, as it pushes the mammoth industry to clean up its act.

China, the producer over half of the world’s steel, has made major cuts to its excess steel capacity in recent years in the wake of concerns over inefficiency in the industry, complaints from other countries over market-flooding, and the adverse impact the sector has had on the environment.

This week the Ministry of Industry and Information Technology said (link in Chinese) that 11 enterprises from across the country had violated environmental and safety regulations, or had added new capacity without permission. They will be disqualified from the government producers list as of Jan. 16, effectively preventing them from operating.

Another 17 companies were told to correct environmental and capacity issues or also face disqualification, although no timeline for action was provided. On the list was Jiangsu Shagang Group, a major subsidiary of China’s top steel producer, China Baowu Iron and Steel Group.

Local governments have been ordered to curb production over the winter to reduce pollution that is exacerbated during the season as power plants fire up to heat homes in the country’s north. However, some major steel-producing cities such as Tangshan, Hebei province, have been unclear in their orders to many steel mills, with some steel producers actually increasing production, Reuters reported.

Overall, the government has been successful in its efforts to cut excess steel capacity in recent years, with meeting targets of reducing 150 million metric tons (165 U.S. tons) a year, said Li Hongmei, the head of content at metals platform Mysteel.

“The focus of the Chinese steel industry now will be shifting toward mergers and acquisitions, enhancing the concentration level and at the same time safeguarding against any possible reincarnation of removed capacities in the past three years,” Li said.

Steel production is set to rise 11% year-on-year to a peak of 886 million metric tons in 2018, despite the cuts, the government’s Metallurgical Industrial Planning and Research Institute said at an industry event last week. Analysts say that this contradiction between cuts and increased production is explained by the government underestimating existing capacity while closing capacity that was already idle.

However, future production may be further boosted if expectations that the government is preparing for a major infrastructure push to counter slowing growth are proved correct.

“Steel output has surged for the past two years due to a construction boom driven by stimulus policies,” said Lauri Myllyvirta, a senior analyst with Greenpeace’s Global Air Pollution Unit. “But the picture now is that the stimulus policies have given the industry a big shot in the arm, and much larger capacity cuts will be needed to adapt to a future of ‘high quality’ growth, if there is going to be such a future,” he added.