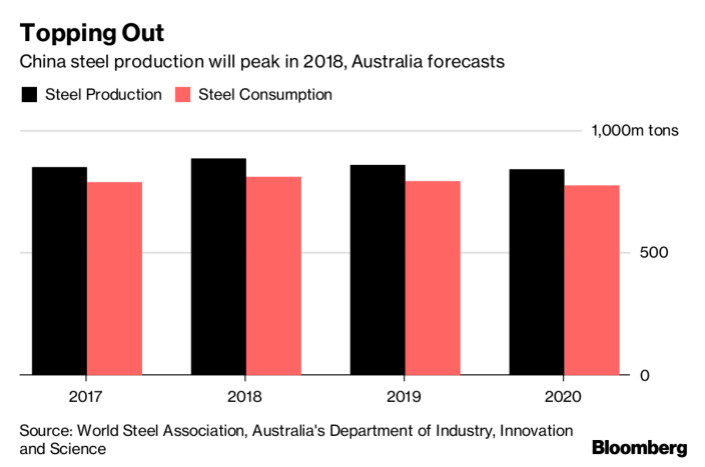 (Bloomberg) — The world’s largest steel market is about to go into reverse. Production in China will peak in 2018 and then shrink next year as local demand drops, according to forecasts from the Australian government, which says the shift will add to headwinds for core ingredient iron ore.

Mainland steel production is “forecast to peak in 2018,” the Department of Industry, Innovation & Science said in a quarterly report on Tuesday. After topping out at 886 million metric tons, output is expected to drop to 861 million tons in 2019 and hit 842 million in 2020, the department said. Over the same time frame, local demand is seen contracting by 34 million tons.

China accounts for half global steel output, and trends in its mammoth industry shape the worldwide market. This year, the sector has boomed with local mills — the largest buyers of seaborne iron ore — making record volumes as Beijing’s drive to curb overcapacity and fight pollution aids margins. The Australian government’s view that China is at peak steel contrasts with outlooks from some of the country’s biggest miners, including BHP Billiton Ltd.

The expected drop-off in mainland production is “driven by a suite of government policies,” including stricter environmental regulations, supply-side reforms reducing some loss-making capacity, and a push to cut debt, according to the department. At the same time, global output to 2020 is expected to largely hold steady, aided by expansions outside China, it said.

Prices should drop “as a result of declining demand, a well-supplied seaborne market and growing supply of Chinese scrap,” the department said. Australia’s exports, as well as those from rival Brazil, are expected to go on rising, climbing from a combined 1.26 billion tons this year to 1.32 billion in 2020.

The department has hinted at China hitting peak steel in earlier reports, although the latest outlook shows a faster pace of decline. In the March quarterly, it had projected Chinese steel output would hold steady this year, then dip at an annual rate of 0.5 percent through 2023 to 805 million tons.

BHP, which has immense iron ore operations in Australia, has a very different take. The world’s largest miner said in August that its base case “remains that Chinese steel production is yet to peak,” according to a commodity outlook. “The most likely timing of the peak is the middle of next decade,” said Huw McKay, vice president of market analysis and economics.

“We firmly believe that China will ultimately double its accumulated stock of steel in use, which is currently about 6 tons per capita,” McKay said. “That stock is about half of the current U.S. level and slightly less than half the German, South Korean and Japanese levels.”

In a note received on Tuesday, Morgan Stanley said that it expected China’s overall iron ore demand will peak this year at 1.28 billion tons, and then shrink by 180 million tons in the period to 2023. The drop will be driven by “falling crude-steel production and increasing scrap use,” bank said.