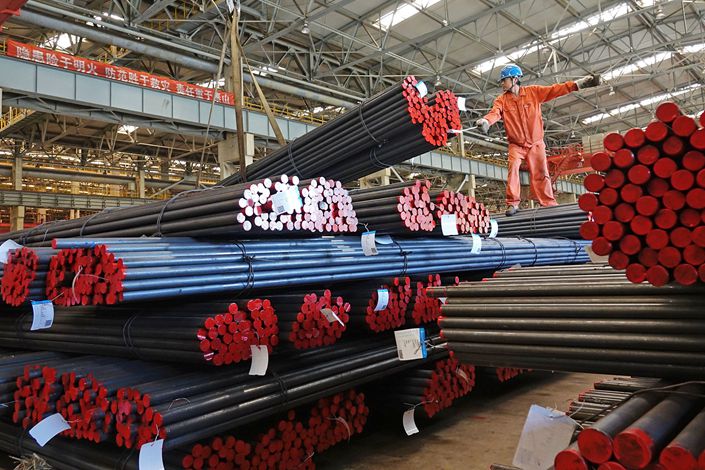 A worker moves steel pipe in a warehouse in the northeastern city of Dalian on June 21. Photo: VCG

China’s major steel companies saw their profits grow by 151% in the first half of 2018 from the same period last year as the government’s drive to eliminate excess capacity helped push up steel product prices, according to a leading industry body.

The 379 members of the China Iron and Steel Industry Association (CISA) posted total profits of 139 billion yuan ($20.49 billion) in the first half of the year, with total revenues rising 15% to 1.97 trillion yuan, the association announced (link in Chinese) on Wednesday.

Profits were bolstered by the government’s ongoing drive to reduce excess capacity in the steel sector, with lower supplies leading to higher prices, the CISA said. The average price of domestic steel products was up 13% year-on-year, with steel pipe showing the biggest increase, trading at 5,406 yuan per ton, an increase of 25% year-on-year.

Several producers, including the U.S. and EU, have accused China of subsidizing its domestic steel industry and then dumping the excess steel output abroad, undercutting their domestic producers, and have levied punitive tariffs in response. The capacity cuts are intended in part to address these concerns while also helping China move away from infrastructure-driven growth, according to industry insiders.

In March, the government announced plans to cut 30 million tons of steel production capacity this year, completing a five-year plan to reduce capacity by 150 million tons, according to World Steel Association figures.

However, some industry insiders believe that government figures that show capacity has already been cut by 115 million tons are based on tricks such as counting long-closed production lines as fresh cuts. China’s remaining production still dwarves that of other countries, accounting for almost half the world’s steel output in 2017, according to the World Steel Association.

The robust steel profits are part of a trend of strong industrial growth, with profits at all Chinese industrial firms growing by 17.2% year-on-year in the first half of 2018, according to new data (link in Chinese) from the National Bureau of Statistics.