AI Specialist Cashes In on Demand From Banks

By Wang Liwei and Mo Yelin 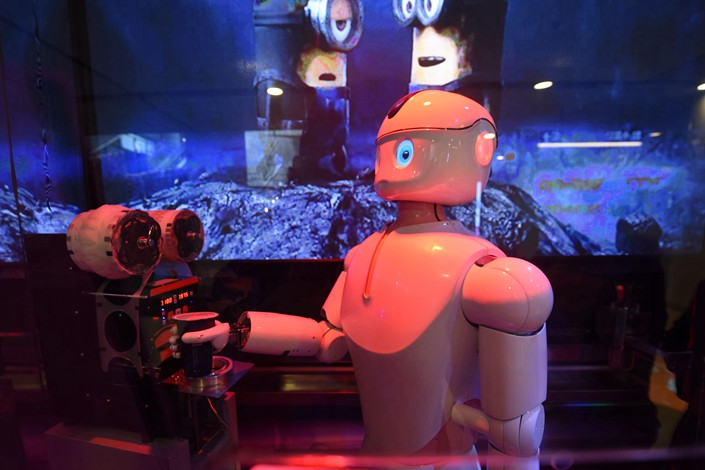 A robot serves milk tea to customers in a shop in Hangzhou, Zhejiang province, on Dec. 10. Photo: IC

4Paradigm Co. Ltd., an artificial intelligence (AI) firm focused on the banking sector, has raised 1 billion yuan ($145 million) in its latest funding round, making it China’s latest unicorn with a valuation of over $1 billion.

Investors in the firm’s C-series funding included two of China’s largest state-owned banks, Agricultural Bank of China and Bank of Communications, as well as previous investor Sequoia China, 4Paradigm said in a statement (link in Chinese). The fundraising valued the company at $1.2 billion, it added.

The company said its customers include most of China’s major banks and other financial institutions, with a customer base whose combined assets exceed 50 trillion yuan. It has also expanded to various other sectors, such as health care, retail and media.

The fundraising is the latest for a company focused on the “industrial internet,” a buzzword for firms that focus on higher-paying business customers rather than more-cost-conscious ordinary consumers.

Earlier this month, G7, a Beijing-based company that provides smart logistics services for freight fleets, announced it raised $320 million. And in July, Unisound, a provider of AI-powered voice services, said it netted 600 million yuan from several state-backed funds, giving it a valuation of more than $1 billion.

The shift comes as investors become more selective in their high-tech picks, following years when they showered money on consumer-focused companies in areas as diverse as food delivery, bike-sharing and ride-hailing. Many of those are now running into trouble as they run low on cash after years of offering services at subsidized prices to attract new customers.

The trend also saw internet giant Tencent Holdings Ltd. in September announce its first across-the-board overhaul in six years to focus more on business customers in the face of slower growth from its traditional consumer user base.

“4Paradigm is a first-mover in such a new trend,” said Wang Yonggang, an engineer Sinovation Ventures, which was among the company’s earliest investors.

The market for AI services from the financial sector will get bigger as more Chinese banks seek such technologies to assist in processes such as monitoring for money laundering, said Qu Xiangjun, a partner at McKinsey & Co. He said average spending by Chinese banks on new technologies was equal to only 1% to 3% of their annual revenue, compared to 5% to 10% for Western counterparts.