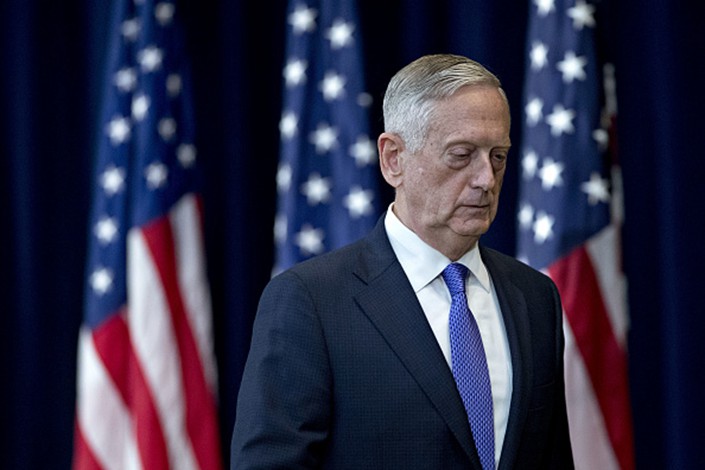 (Bloomberg) — There are many reasons to be optimistic about 2019. The increasingly isolated man in the Oval Office is not one of them.

With the first two years of Donald Trump’s presidency drawing to a close, the past week all too perfectly exemplified its destructive effect on competent government in Washington — and it should give all Americans, in all parties, cause for concern.

On Thursday, one of the last remaining seasoned and respected professionals at the top of the administration announced his resignation, for reasons he explained in a letter that was as courteous as it was devastating. On Saturday, government services were (yet again) shut down because of the quarrel between Congress and the White House over the president’s obsession with a border wall that won’t work but will waste billions of taxpayer money. And in between, the stock market dove to its worst week since 2011, as investors concerned about Trump’s taste for trade wars delivered a vote of no-confidence.

Each of these mistakes has a common denominator: Trump’s recklessly emotional and senselessly chaotic approach to the job.

At the halfway mark of this terrible presidency, one has to wonder how much more the country can take.

The president’s decision to withdraw U.S. forces from Syria, which jeopardized military success in a crucial battle and betrayed an ally as well, led James Mattis to quit in protest. He is the first defense secretary to do so since the position was created in 1947. His resignation letter is meticulously calm and respectful — and all the more brutal as a result. Every American should read it.

He wrote: “While the U.S. remains the indispensable nation in the free world, we cannot protect our interests or serve that role effectively without maintaining strong alliances and showing respect to those allies.” He added: “I believe we must be resolute and unambiguous in our approach to those countries whose strategic interests are increasingly in tension with ours.”

Mattis understands that the two principles — which have served America well since World War II — must not be separated. And that gives what comes next such force: “Because you have the right to have a Secretary of Defense whose views are better aligned with yours on these and other subjects, I believe it is right for me to step down from my position.”

In short: One of the few people protecting Trump from Trump is leaving. And unfortunately, few Republicans in Congress have shown any appetite for that job, preferring instead to appease his worst instincts — as the debate over a wall along the U.S.-Mexican border continues to show.

Even if a wall were a good idea — and it is not — a government shutdown would be a dumb way to pursue it. The Democrats have just won control of the House of Representatives. The country has given them a full share of responsibility for making decisions about public spending. Does the president expect to override this reality by maneuvering to shut down the government? His penchant for ignoring reality — evident in so many other areas, including climate change — apparently extends to elections.

This weekend, he imposed needless costs on government workers and on the country at large — not to accomplish anything, or to defend any principle, but to pander to the extreme wing of his party and rage at being thwarted. Republicans in Congress have gone along with this for too long. November should have been a wake-up call.

Some Republicans, at least, seem to be slowly realizing what a disaster Trump’s trade policies have been. His trade war with China has won few concessions but has cost American workers, consumers, farmers and businesses a great deal. With other countries pleading for sanity and institutions such as the International Monetary Fund and World Trade Organization warning of severe consequences if trade sanctions get out of hand, talk of a looming recession is growing. Yet the president seems determined to make matters worse — and to hell with the economic consequences.

Unless something changes — unless, in particular, Republicans in Congress start showing some spine — two more years might be enough to test whether we can sustain Trump’s model of bad government. This past week, we got a glimpse of what the beginning of the collapse may look like — and what it may ultimately cost us.