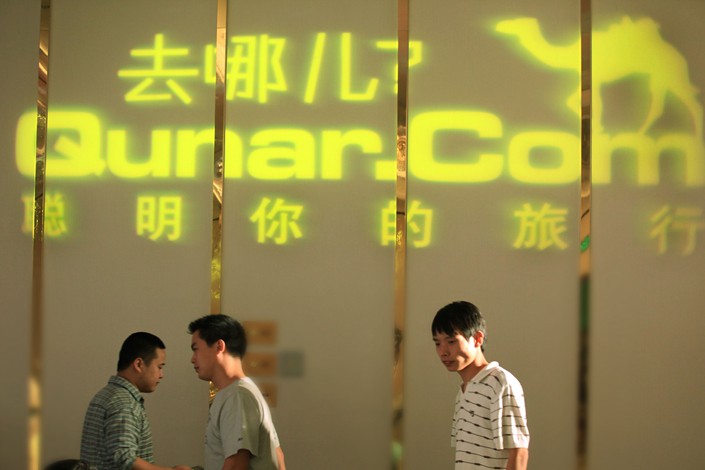 Online travel agency Qunar.com Inc. has sacked more than a hundred employees and several are pursuing arbitration against their dismissals, Caixin understands.

A former Qunar staffer told Caixin on Saturday that his entire team of more than 100 had been fired, along with an unknown number of employees in two other departments.

The employee, who asked to remain anonymous to avoid jeopardizing his future employment in the industry, was told at 8 p.m. on Dec. 11 that his contract would be terminated 36 hours later, and was offered the chance to apply for an engineering job he was not qualified for.

This put Qunar potentially in breach of Chinese labor regulations which require firms to inform employees in writing 30 days before terminating a contract.

The employee said he and others were offered engineering positions with the onerous requirement of reskilling and passing an assessment within the 36 hour window.

The man said most of the sacked employees in his team were unsatisfied with their reimbursement plans and the alternative arrangements. Several are pursuing labor arbitration against the decisions.

Qunar said there had been routine layoffs resulting from annual year-end assessments but would not confirm how many contracts had been terminated.

The end of the year is a peak period for layoffs in China, as elsewhere. Companies typically set aside funds in the yearly budget to pay layoff-related costs, and seek to use up those budgets by the end of the calendar year. In China, some firms automatically lay off the poorest performing employees each year — typically at a fixed rate of around 10% of their workforce.

But this year could be tougher than most. Early this month Beijing announced it would hand cash to employers who lay off fewer workers, signaling the growing unemployment fears amid slowing domestic growth and an ongoing trade war with the U.S.

On Wednesday, online group discount giant Meituan Dianping denied reports of large-scale job cuts at the company involving workers in content operations, research and development and other departments. The company, which went public in September in Hong Kong, claimed it had cut less than 0.5% of its workforce — about 250 employees.

Earlier this month, Zhihu, China’s version of Quora, reportedly laid off nearly one hundred employees. The firm said the layoffs followed annual year-end assessments and aimed to improve the overall quality of its employees.

Baidu-backed Beijing-based digital travel services company Qunar delisted from the Nasdaq after it was acquired by Ocean Management Holdings Ltd. at a value of around $4.4 billion (link in Chinese). The firm, which was founded in 2005, provides hotel reservations and discount airfares.