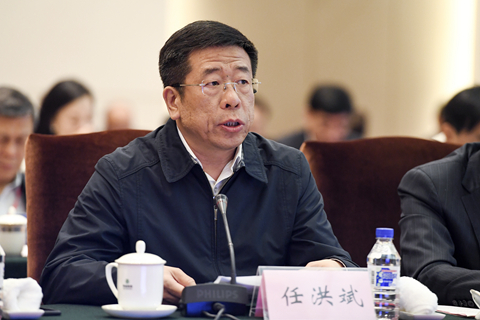 SASAC oversees China’s massive state-owned enterprise (SOE) sector, which comprises almost 100 centrally administered SOEs with combined assets of 76.2 trillion yuan ($11 trillion) as of the end of 2017. The central government has been pressing to shake up the stodgy state-run sector by bringing in outside investors and encouraging consolidations. Under the mixed-ownership reform initiative, dozens of SOEs have unveiled plans to invite private sector investors into their subsidiaries.

The State Council, China’s cabinet, named Ren to the post of deputy director Friday. He succeeds Xu Fushun, who was removed, according to a statement posted on the website of the Ministry of Human Resources and Social Security. Xiao Yaqing continues as head of SASAC.

Ren, 55, is the former chairman of the state-owned China National Machinery Industry Corp., or Sinomach Group. He is also a member to the National Congress of the Communist Party and an alternate member of the Central Committee of the party.

He joined China National Construction & Agricultural Machinery Import & Export Corp., a subsidiary of Sinomach, in 1986. He worked his way up from sales representative to president. In 2013, he was named chairman of the parent company.

His tenure at Sinomach coincided with Beijing’s push for SOE reform. As the head of Sinomach, Ren oversaw the restructuring of the parent group and pushed through mixed-ownership reform at two subsidiaries. Since 2014, SASAC and other ministries have orchestrated more than a dozen mergers in various sectors that involved more than $1 trillion in assets as part of a campaign to consolidate state assets.

Following the restructuring, Sinomach has more than 40 wholly or majority-owned subsidiaries, including 12 listed companies. The company ranks 256 on the 2017 Fortune 500 list.