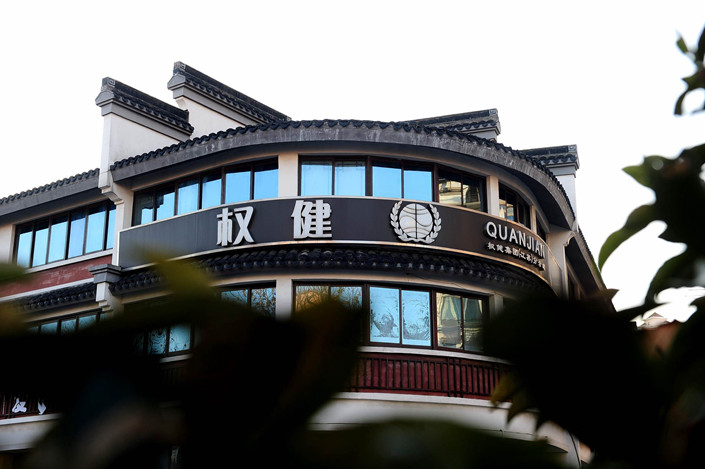 A Chinese company in hot water after its bogus treatments allegedly contributed to the death of a 4-year-old child with cancer is now fighting claims it is involved in illegal pyramid selling.

Tianjin-based Quanjian Nature Medicine Technology Development Co. Ltd., which makes herbal health products, was first accused of selling formulations it said could cure cancer without the use of chemotherapy to the family of a girl who later died from the disease.

On Wednesday Tianjin’s government alleged that investigators had found evidence Quanjian was involved in illegal pyramid sales as well as deceptive advertising.

How did the story come to light?

On Dec. 25, Dingxiangyuan, a health news portal, reported the story of a girl surnamed Zhou who died from cancer in 2015. According to the report, after months of painful surgery and chemotherapy at a Beijing hospital, her parents decided to replace her medical treatment with herbal products made by Quanjian.

A total of three herbal products sold to Zhou’s family were allegedly touted as being capable of curing cancer without the need for chemotherapy. However, at least two of them were not registered as medicines nor even as health supplements, Caixin has found.

The article further alleged Quanjian lied to consumers by saying the 4-year-old had been cured by its products.

The company at the center of the scandal is the main subsidiary of Quanjian Group, an herbal supplement manufacturer founded by Shu Yuhui in 2004. The group developed rapidly in recent years with revenue of 19.2 billion yuan in 2016, up from just 550 million yuan in 2012.

There is little public information available about company founder Shu. But he is known for inventing so-called “fire therapy,” in which a patient is covered in a blanket that is then set ablaze.

Before creating Quanjian, Shu created an illegal organization (link in Chinese) that claimed to be a government entity and sold fake permits to companies that it said would let them engage in direct selling.

The company sold more than 100 supplements, of which only 13 were registered with authorities, Caixin found.

The company’s other signature products include a shoe insole that it claims can cure heart disease. State broadcaster CCTV reported the company’s other big seller is an edible sanitary pad, which a salesperson claimed can help men’s prostate health if consumed after use by a menstruating woman.

What else does the company do?

Quanjian Group runs four hospitals in China that all claim to be able to cure cancers by using a combination of western medicine and traditional Chinese techniques. One is the Chengdu-based Quanjian Hospital, which makes the dubious claim of an effectiveness rate of 100% and a “cure rate” of 85% for cancer patients.

The group has since expanded into other businesses though investment. Shu and his son Shu Changjing currently control more than 30 companies ranging from real estate and finance to sports.

In 2015, Quanjian made headlines after it paid a massive amount of cash to purchase a prominent football club in Tianjin. In the same year, company founder Su become a shareholder in Shenzhen-listed JC Finance & Tax Interconnect Holdings Ltd., an industrial heat treatment equipment-maker, after paying 1.46 million yuan for a 24% stake in one of the latter’s shareholders.

Is it a pyramid scheme?

Quanjian describes itself as the country’s largest direct sales company. It’s a business model that sees sellers make money by selling products to consumers — or by sponsoring new direct sellers and earning a commission.

This is often compared to the “pyramid scheme” model, which was outlawed in China in 2005, where companies make money not by selling products but by recruiting members through the promise of payments or services for signing up others.

Quanjian claims to have established large direct networks with more than 23 branches across the country.

However, legal experts told Caixin it would be challenging for authorities to charge the company with the crime of running an illegal pyramid scheme. One reason is that Quanjian often uses third-party sales teams.

How has the Chinese public reacted?

Quanjian has been a trending topic on the Twitter-like microblogging site Weibo for past week, where users have mocked its products and pored over the history of the company and its founder.

Major e-commerce sites, including Alibaba’s Taobao and JD.com, have since pulled the company’s products from their digital shelves and local governments, including in Shanghai, have said they will launch inspections of Quanjian’s physical stores.

A previous version of this story mistakenly said that CCTV reported that the company’s edible sanitary pad could help men’s prostate health “if consumed...” The part about consuming the pad could not be verified from the CCTV report.