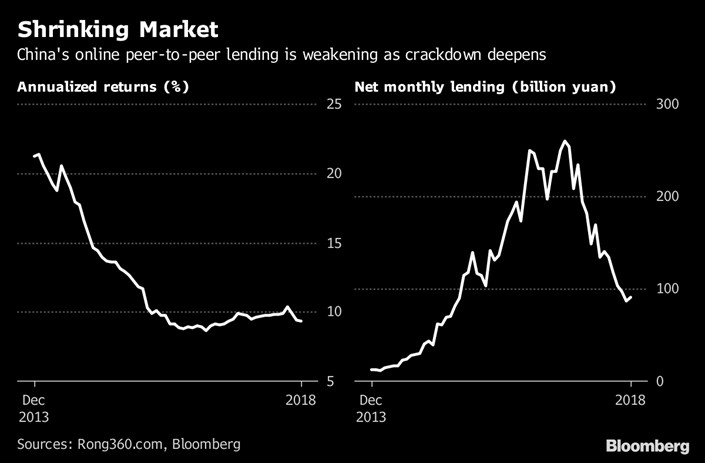 (Bloomberg) — Another Chinese peer-to-peer (P2P) lender told investors on Wednesday it wouldn’t be able to pay them back, highlighting risks to the nation’s broader financial system as rising defaults and tougher regulations hit the $176 billion industry.

Hangzhou-based Xinhehui told investors at a meeting that it won’t be able to make repayments on a total of 2.26 billion yuan ($330 million) of products issued to them, according to attendees and videos seen by Bloomberg News. More than 17,000 individual investors are affected.

Thousands of retail investors have already faced life-altering losses from a surge in defaults and fraud in the largely unregulated business. Shanghai-listed Meidu Energy Corp., which owns about 34% in Hangzhou Xinhehui Internet Financial Services Co. Ltd., warned its shareholders in October that there were risks the company wouldn’t meet performance commitments it made to Meidu for 2018.

Meidu Energy fell as much as 3.7% on Friday to its lowest intraday price since Oct. 19, even as the benchmark Shanghai Composite Index rose a fraction. The stock was down 1.4% at 10:04 a.m. local time.

“My faith in this platform as well as its shareholders, some of which are listed companies, is completely shattered,” said investor Tracy Wang, whose family members put almost 2 million yuan into the platform in total. “No one is willing to take any responsibility,” she said.

About 860 million yuan of Xinhehui products will mature Sunday, while another 1.4 billion yuan are due for repayment on May 6, according to documents seen by Bloomberg. A group representing investors affected by the default rejected a debt restructuring proposal by the platform’s owners that involved swapping their debt for equity in one of its major shareholders. The company would then use its assets as collateral to get loans from Huarong Asset Management Co. Ltd.

Calls to Xinhehui and its owner Chen Hangsheng were unanswered. A notice for Wednesday’s meeting with investor representatives remains on the front page of Xinhehui’s website. Meidu said it’s aware of the situation and that it doesn’t take part in daily operations at Xinhehui.

Shanghai-based P2P platform Yidai issued on a plan on Saturday to refund its lenders after months of losses, five days before Xinhehui’s meeting with investors. Yidai had about 32,000 investors with an outstanding principal balance of 4 billion yuan, and expects to repay them in three to five years.

Tougher regulations and rising bankruptcies have worried P2P investors, and lending on those online platforms has plummeted, according to data from Rong360.com, which provides information on financing and loan products.

As few as 300 P2P firms will remain by the end of the year, according to an estimate from Shanghai-based Yingcan Group. The number of operators dropped by more than 50% to 1,021 during 2018, it said.

“More companies have realized that the lending risk is growing,” said Yu Baicheng, Shanghai-based head of research at 01Caijing, an independent internet finance researcher. “They can’t sustain their business because they’ve run into liquidity problems after expanding at such a large scale.”