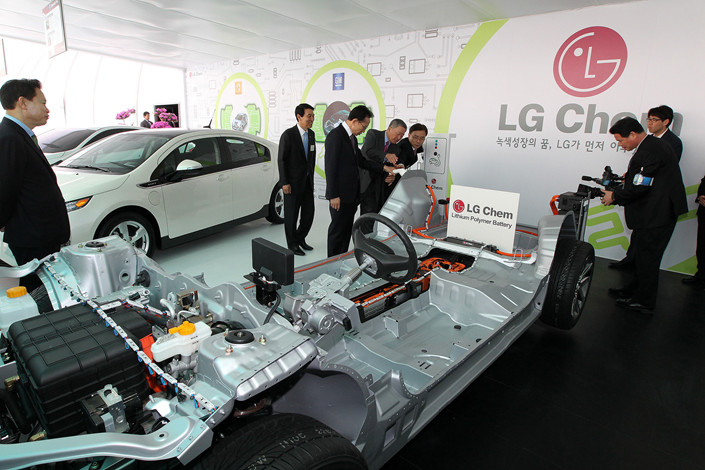 The investment is focused on production of batteries that are typically used in light electric vehicles, as well as other devices like power tools. Photo: VCG

South Korea’s LG Chem Ltd. said it will invest more than $1 billion on new battery-production capacity in the eastern city of Nanjing, tapping demand in both China and globally for storage products that are a central component of renewable energy cars and power plants.

The plan will see LG Chem pour 1.2 trillion won ($1.07 billion) into the new Nanjing complex, about half of which will go for electric vehicle and small battery production, the company said in a Thursday announcement (link in Korean) on its website. It held a signing ceremony the previous day to finalize the investment, which will be made over the next two years.

The investment is focused on production of batteries that are typically used in light electric vehicles, as well as other devices like power tools.

“Through this expansion, we will lead the global market in areas such as light electric vehicles and power tools,” said Kim Jong-hyun, president of LG Chem’s battery division, at the signing ceremony. “We will actively nurture three battery factories in Nanjing as Asian and global export bases.”

Announcement of the contract signing comes a half year after LG Chem announced it would invest about 2 trillion won through 2023 on a second manufacturing base in Nanjing. The company has existing battery-production facilities in the city dating back as early as 2004.

The big new investment comes as Beijing aggressively promotes the adoption of clean technologies, many reliant on batteries, in a bid to clean up the country’s air and promote the development of cutting-edge technologies. The nation is already the world’s largest electric car market, with sales of new energy vehicles passing the 1 million mark for the first time last year.

The gold rush has also spawned a generation of homegrown battery makers led by Contemporary Amperex Technology Co. Ltd., which has piggybacked on Beijing’s generous policy support to become the world’s largest producer since its founding in 2011.