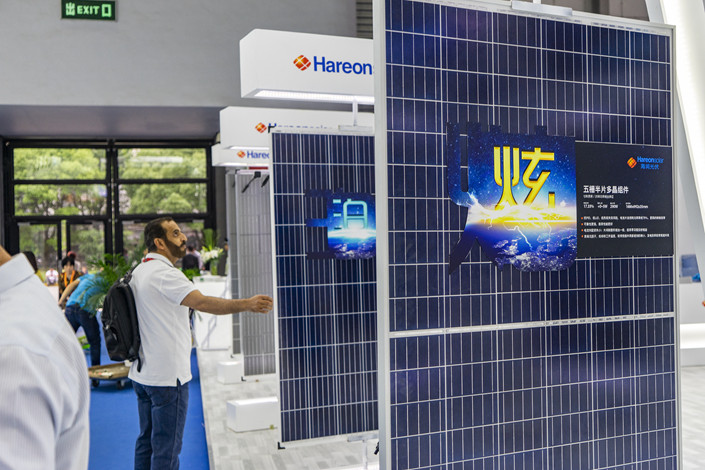 Hareon Solar solar panels on display at an industry exhibition in Shanghai on May 30. Photo: VCG

A debt-laden solar-battery maker has warned it is on the cusp of delisting as it unveiled plans to sell seven domestic and overseas subsidiaries to raise money to repay overdue debt.

The announcement by Hareon Solar Technology Co. Ltd., based in East China’s Jiangsu province, highlights the troubles faced by companies in an industry that has long been plagued by overcapacity.

The Shanghai-listed company is planning to sell seven fully-owned subsidiaries for about 1.55 billion yuan ($226 million) in total to repay creditors that include policy lender China Development Bank, according to Caixin’s calculations based on multiple company filings with the Shanghai Stock Exchange.

The company, whose shares have been suspended from trading since May, has defaulted on about 3.64 billion yuan in debt payments. On top of that, Hareon Solar reported a loss of roughly 1.05 billion yuan for the first three quarters of this year, and has suspended operations at major manufacturing units while it “faces a number of legal disputes and overdue debts,” it said in a document that warned investors of delisting risks (link in Chinese).

Hareon Solar isn’t the only company in China’s solar power industry that’s been struggling. Solar energy conglomerate Hanergy Holding Group Ltd. planned to cut nearly half of its workforce by the end of this year. Troubled solar-panel maker Yingli Green Energy Holding Co. Ltd. was sued by a creditor over defaulted bonds worth 65.7 million yuan.

China’s solar power industry has long faced overcapacity issues partly because of the government’s generous subsidies for the sector, which it made as part of an effort to build up its renewable energy infrastructure as it seeks to curtail its dependence on fossil fuels and reduce pollution from coal-fired power plants.

But authorities more recently have started to unwind the supportive policies due to the overcapacity problem as well as trade disputes with major trading partners. The government in June cut down on subsidies for new projects that have fueled the industry’s boom for nearly a decade.

That has helped dampen investors’ enthusiasm for the industry — roughly 34,500 megawatts of new installed capacity was added in the first three quarters of this year, down 19.7% year-on-year, according to data (link in Chinese) from the National Energy Admission (NEA).

Yet oversupply remains a problem. About 2.9% of all electricity generated by solar power was wasted in the first three quarters of the year, although it was down from 5.6% during the same period in 2017, according to the NEA data.