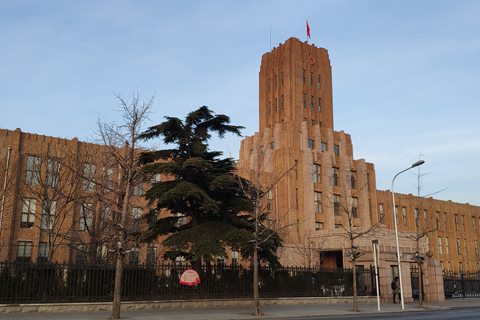 The Intermediate People’s Court in Dalian, China, where Robert Lloyd Schellenberg of Canada was retried and convicted on drug smuggling charges. Photo: VCG

A Chinese court sentenced a Canadian to death for smuggling illegal drugs. The verdict in a retrial may further escalate a diplomatic rift between China and Canada that includes the arrest of a prominent Chinese business executive.

A court in the northeastern city of Dalian announced the death penalty for Robert Lloyd Schellenberg and confiscation of all of the Canadian’s personal assets. The conviction came in a retrial after Schellenberg appealed a previous verdict with a more lenient sentence. Schellenberg was accused of trying to smuggle more than 222 kilograms of methamphetamine from China to Australia.

The ruling came after a higher court in the Liaoning province ordered a retrial on Schellenberg’s case late last year. The defendant was appealing an initial conviction and sentence of 15 years in jail and a 150,000 yuan fine. Schellenberg has 10 days to appeal the new verdict.

The conviction is likely to further inflame a diplomatic row between China and Canada. Tensions have risen since Canada arrested a senior executive of Chinese telecom giant Huawei Technologies on the request of the United States in early December. Two Canadian nationals have since been detained in China on allegations of endangering national security.

According to a court statement (link in Chinese), Schellenberg in November 2014 worked with others in an international drug ring to pack 222 bags of the drug and hide them for smuggling inside tires stored in a Dalian warehouse.

A translator working for Schellenberg reported the case to police and Schellenberg was arrested in December 2014 in Guangzhou when he was on a plane to Thailand. A Chinese citizen named Mai Qingxian, who allegedly worked with Schellenberg in dealing the drugs, was sentenced to death with a two-year reprieve in a separate case. Several other members of the group are at large, according to the court.

After the first trial in 2016, a Dalian court on Nov. 20, 2018, announced Schellenberg's conviction and the sentence of imprisonment and a fine. On appeal, a higher court in late December last year ordered the Dalian court to retry the case as prosecutors demanded the right to submit new evidence and call for a stiffer sentence.

The court announced the new verdict shortly after a one-day hearing.