New Rivals, Including ‘Toilet,’ Are Coming for Tencent’s WeChat

By Chen Mengfan and Mo Yelin 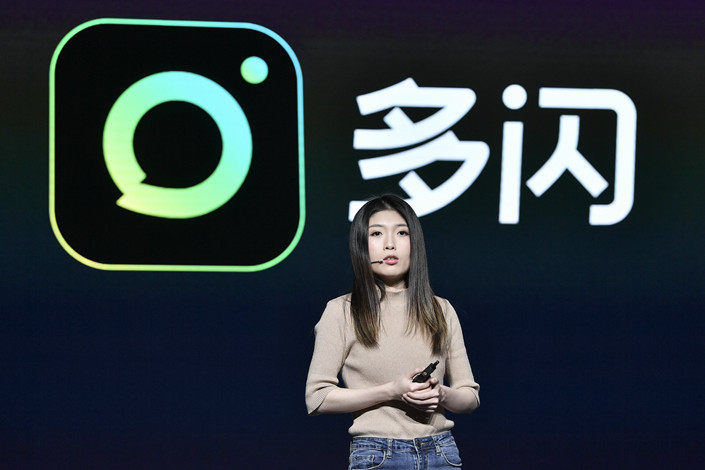 * Duoshan’s new functionality is an upgrade to the private texting function of Douyin, known internationally as TikTok

* ByteDance’s success has put pressure on Tencent, which owns WeChat, an app that some analysts believe has peaked

ByteDance Ltd., the world’s most valuable startup, has launched a new video-based messaging service in a direct challenge to the Tencent Holdings Ltd. behemoth WeChat.

The app, called Duoshan (which means “many flashes” in Chinese), was unveiled in a livestreaming event in Beijing on Tuesday. In addition to text-based messaging, the app allows users to share images and videos that it says will disappear after 72 hours. The feature has seen it labeled a clone of leading U.S. social-media network Snapchat.

Duoshan’s new functionality is an upgrade to the private texting function of Douyin, known internationally as TikTok. Douyin is one of ByteDance’s most successful offerings with a daily active user base of 250 million by January, according to ByteDance executive Zhang Nan. Those figures are up from just 1 million a year ago.

Beijing-based ByteDance came to prominence through its news-aggregator platform Toutiao, or “today’s headlines” in Chinese. The 6-year-old startup reportedly secured $3 billion in its latest funding round at a valuation of $75 billion, making it the world’s most valuable unicorn.

Duoshan is currently in beta testing and only available to Android smartphone users, who can log on to the new service with their Douyin accounts. Users lack the ability to “like” or comment on videos. The disappearing posts will “alleviate users’ social pressure, as you don’t need to worry that they are ‘digging a grave’ for your future,” said Xu Luran, the 25-year-old product lead at Duoshan.

It’s a bold claim, given Snapchat made a similar pledge about “self-destructing pictures” and faced a backlash when it was forced to reveal that videos were stored on a recipient’s device and could be retrieved by someone with technical expertise.

ByteDance’s dramatic success has put pressure on Tencent, which owns WeChat, an app with more than 1 billion users that has revolutionized daily life in China through the ease of its mobile payment system. After years of rapid development, some analysts believe WeChat has peaked and is starved for new ideas. Earlier this month, WeChat creator Zhang Xiaolong laid out a future strategy in a four-hour speech, which addressed issues like the app’s latest overhaul.

Links to download Duoshan have been blocked on WeChat. A Tencent representative refused to comment on the matter. Tencent and ByteDance have previously been involved in legal battles over allegations of copyright theft and anti-competitive behavior.

Meanwhile, two WeChat challengers that also launched on Tuesday — Matong MT (“matong” is Mandarin slang for “toilet”) and Liaotianbao — have also been blocked on Tencent’s platform. Matong MT was founded by Wang Xin — who was sent to jail after his last app, Qvod, was widely used to share pornography.

And Liaotianbao, which translates as “Chat Baby,” was a revamped version of Bullet Message, which was touted as a rival to WeChat after it gained 5 million users within two weeks in August, though its user growth slumped quickly afterwards.

Li Yi contributed to the report.