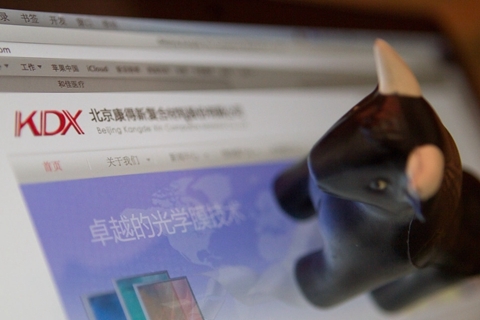 A local government bailout of a Chinese supplier of automaker BMW AG has rattled investors who fear that local authorities are likely to take over the company’s core, profitable business in the wake of the default.

Shenzhen-listed Kangdexin Composite Material Group Co. Ltd. failed to repay principal and interest due Tuesday on 1 billion yuan ($148 million) in debt, according to its exchange filing. The company is based in the city of Zhangjiagang in the eastern province of Jiangsu that borders Shanghai. In recent years, it has supplied automakers such as BMW and Mercedes Benz with carbon fiber composite materials, according to its annual reports.

The default has raised doubts on the credibility of its financial statements, which said that the company held more than 15 billion yuan in cash and bank deposits as of the end of September.

Worse still, bond investors are worried that they won’t be able to get their money back. On Friday, the local authority of a district in Zhangjiagang jointly issued a notice with a wholly-owned subsidiary of Kangdexin, saying that it has designated a third-party company to manage the funds in and out of the subsidiary, due to the financial difficulties of Kangdexin’s major shareholder.

The subsidiary, Zhangjiagang Kangdexin Optronics Material Co. Ltd., is widely seen as a major repayment source of Kangdexin. It contributed nearly two-thirds of Kangdexin’s profits in the first half of last year, according to the listed company’s financial statement.

The local authority and the subsidiary said that under the instruction of the city government, they had worked out a plan to separate the subsidiary’s production and operation from the effects of the financial market, according to the notice seen by Caixin. They also said that authorities would unveil a plan to aid the subsidiary.

Some investors have questioned whether the bailout will allow Kangdexin to further delay its debt repayments, or even spin off this profitable subsidiary, they told Caixin.

A Zhangjiagang official disputed that interpretation of the bailout. The bailout has been “misread” as a takeover, yet the notice aims to stabilize the subsidiary’s production and the sentiment of its distributors and suppliers, the official told Caixin Thursday in a phone interview.

Kangdexin said Tuesday (link in Chinese) that its sales and purchasing departments were the ones who had sent the notice, which used some improper wording, to its distributors and suppliers without approval from the company’s senior management.

One day after the default, credit ratings agency Moody’s Investors Service downgraded the ratings of Kangdexin and its debt. The company’s shares have dropped nearly 25% over the past five trading days.