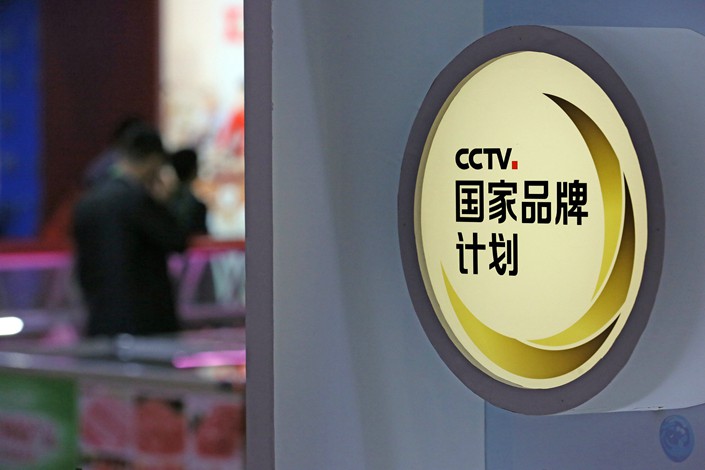 Under the program now being probed, participants pay a fee to get designated as a member of the state broadcaster's “National Brand Strategy.” Photo: VCG

The State Administration of Market Regulation ordered its Beijing bureau to investigate CCTV’s National Brand Strategy after receiving complaints from consumers, the agency said Thursday in a statement (link in Chinese) published on its website.

The project was launched by CCTV in 2016 as a way for advertisers to promote about two dozen brands including home-appliance makers, e-commerce providers and food producers through TV commercials each year. The program also became a major source of advertising revenue for CCTV.

Under the program, participants pay a fee to get designated as a member of CCTV’s “National Brand Strategy.” In exchange, CCTV runs ads before prime-time news programs where participants are listed as partners. Participants can then also use the designation, including CCTV's name, in their own advertisements and other marketing materials.

The project sparked debates over whether the broadcaster had violated China’s advertising and market competition law by implying state endorsement of brands that simply paid a fee to be included in the project.

“Consumers, out of their trust in the news media, will be more trustful of the enterprises selected as ‘national brands,’” the statement said. “They often regard so-called ‘national brands’ as an important basis for choosing enterprises’ products, which is misleading for consumers and seriously infringes on their legitimate rights and interests.”

The core problem lies in the word “national,” said Liu Junhai, director of Renmin University’s Institute of Commercial Law. “Enterprises selected for this program often have to pay a certain amount of advertising costs. Therefore, CCTV National Brand Strategy constitutes advertising language. Article 9, paragraph 3, of the Advertising Law clearly stipulates that advertisements should not use such terms as ‘national level,’ ‘highest level,’ ‘best,’ and so on.”

One brand included in the campaign is Hongmao Medicinal Liquor, which has been mired in its own advertisement controversies. Last year, the company’s headquarters were inspected by Inner Mongolia authorities, who demanded that it explain why it has been penalized by multiple local governments in the past five years for false advertising and adverse reactions to its product.

The product was promoted as a “cure-all” and as a remedy for ailments such as heart disease and rheumatism. One report by a state-owned health publication found that the company was charged with over 2,600 advertising violations across 25 provinces and regions. The product was also called “poison from heaven” by a doctor in Guangzhou, who also said that some of the ingredients are toxic.