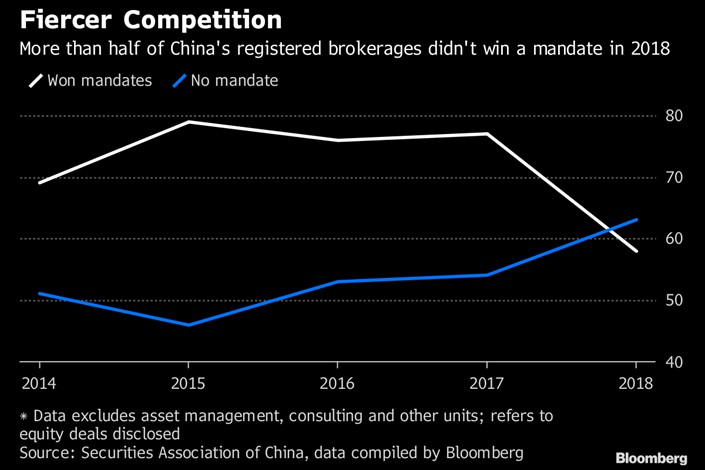 The sector, adjusting to a slowing economy, tightening credit and plunging stocks, last year saw its first annual headcount cut since 2014, the earliest official data available. A drop in stock sales meant the majority of securities firms didn’t win a single mandate last year, and a third of them won’t pay bonuses for 2018, according to Eric Zhu, a Shanghai-based manager at global recruiter Morgan McKinley.

While financial professionals in China are usually paid less than their Western counterparts, paychecks for star performers have swelled to surpass $1 million in recent years. But the government’s focus on reducing debt and risk, coupled with worsening economic conditions, has squeezed margins at even the biggest firms. With few signs of a turnaround and with the China-U.S. trade war still raging, finance workers hoping that this year will be better are likely to be disappointed.

China’s brokerages went on a hiring spree in recent years, fueled by rising markets and ample credit. The industry grew to about 350,000 employees in 2017 from 240,000 three years earlier — and didn’t even shrink during the equities implosion of 2015. Firms bulked up as equity deal values hit a record and trading volumes in China’s stock market surged.

But capital markets were caught up in the overall economic slowdown last year, with stock trading volume at a five-year low as the Shanghai Composite Index delivered the worst performance of any major global benchmark. Equity deal value was a fraction of the high mark reached in 2016, while the total deal value of mergers and acquisitions in China dropped 14% compared with the previous year to $559 billion, according to data compiled by Bloomberg.

PWC expects the amount raised by initial public offerings to decline at least 10% in 2019.

The industry has responded to the new environment. Brokerages cut headcount by more than 4,000 across the sector in 2018, according to the Securities Association of China. JZ Securities Co. slashed staff by almost half, while China Securities Co., backed by the nation’s biggest broker Citic Securities Co., cut more than 1,000 jobs. Five bankers left Southwest Securities Co. on Thursday.

Representatives for Southwest Securities and China Securities declined to comment about the layoffs. JZ couldn’t be reached for comment.

Some state-run firms, a sector that typically refrains from directly dismissing employees, are instead adjusting compensation to make bonuses a larger part of the package, according to Jackie Wang, a Shanghai-based associate director at recruiter Michael Page. Zhu said that, overall, 2018 would be the worst year for pay growth in the two decades since his firm first entered China.

One banker in Beijing said his compensation peaked in 2015, and hit a low last year. The banker, who asked not to be named discussing salary matters, said he had no choice but to stay in his current job and hope for a market turnaround.

The pressure on costs is such that staff are watching their expenses. An investment banker at one of China’s top brokerages who was planning a business trip recently said he sought out a hotel that cost less than half his daily allowance of more than $100. He wanted to ensure travel claims wouldn’t attract his firm’s attention, the banker said.

The tougher job environment could be exacerbated by mergers between firms. Citic Securities recently bought Guangzhou Securities Co. for $2 billion, a deal that “could be an early sign that China’s securities industry is becoming more open to consolidation compared with the past decade,” analysts at S&P wrote in a Dec. 31 note.

“The next three years will be about industry consolidation,” said Zhu. “The big fish gobbling the smaller ones, and the small ones devouring the little shrimp.”

There may be some good news on the horizon, in the form of China’s financial opening. Granting majority ownership licenses to international firms operating local joint ventures should boost the job market, said Wang. Global brokerages would seek bilingual speakers, she said, and for roles such as compliance and risk officers they may be willing to pay a premium of as much as 50% to candidates from local firms.

Any benefits may be a while coming, as UBS Group AG and China International Capital Corp. are the only securities firms expanding in Shanghai right now, according to Morgan McKinley’s Zhu. Robert Walters’ Mullally said only bankers with a track record of winning new clients will be hired.

Among most local firms, bankers are willing to move without a salary increase and, as recently as December, an opening for an analyst position would attract as many as 70 applicants in a week, Wang said.

“Supply and demand in the job market have reversed,” she said.