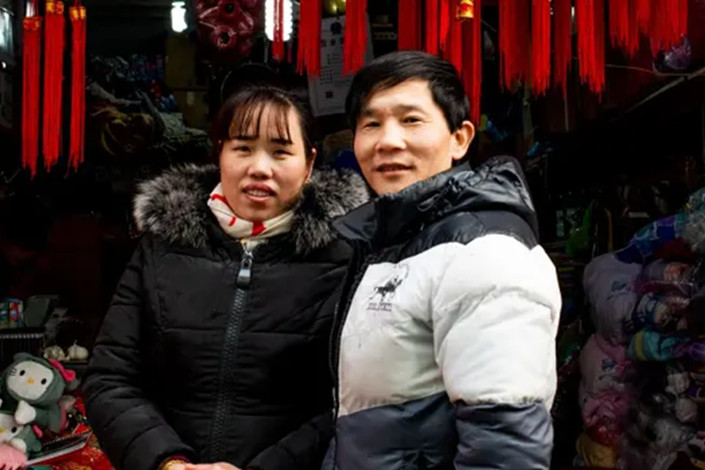 Wu Xia her husband Sun stand outside their shop in downtown Shanghai. This year the cheery kaleidoscope of red and gold hanging outside her store masks the subdued mood of many of China's small business owners. Photo: Grainne Quinlan/AFR

Business is usually booming for Wu Xia in the lead-up to Lunar New Year, China’s most important national holiday.

While her neighborhood shop sells everything from teapots to toothbrushes, the traditional lanterns, red envelopes and other decorations popular in Chinese households during the week-long festival make up a big part of her annual sales.

But this year the cheery kaleidoscope of red and gold hanging outside her Shanghai store masks the subdued mood of many of China’s small business owners.

”We saw a big change last year. Several years ago, there were a lot of laborers building the train networks who would buy everything they needed from our shop, but Shanghai does not need this kind of labor any more. People are leaving the city,” said Wu, 44, who moved to Shanghai with her husband Sun from the eastern province of Anhui a decade ago to make their fortune.

The couple, whose grown children are now working in local department stores, are considering shutting up shop. Like many small business owners who spoke to The Australian Financial Review, they say rising rents, red tape and high costs have made life difficult.

”In Shanghai, you also need a license to run a business and many of the small vendors have been kicked out because they don’t have a license,” she said.

The couple are the face of the millions of small business owners the Chinese government said it wants to help with tax cuts and other incentives to get the world’s second-largest economy firing on all cylinders again. While official 2018 gross domestic product data (GDP) data to be released on Monday will show the world’s second-largest economy grew at more than 6.5%, many small business owners say they are not seeing the benefits of the country’s economic miracle.

They are a world apart from the billionaire property and tech entrepreneurs China has become famous for. For many life is better than for previous generations in the country but the promise of easy money that lured them to big cities like Shanghai a decade ago has dried up.

”The Golden Era of Shanghai is over,” declared Steve Venturini, who is leaving China after running a popular Italian bistro and gelateria in Shanghai’s former French Concession for 10 years. Entrepreneurs like Italian-born Venturini, whose father is from Australia, said business became untenable due to soaring costs, taxes and tighter regulation. This came at a time when the prices for luxury goods, such as the pasta and ice cream his customers would queue up for, were falling.

”It’s always been tough but the government doesn’t care if you are making a profit or not. Prices dropped but rents and utility fees and taxes keep going up,” said Venturini who is moving to Japan where his wife was offered a job.

While Beijing is promising to cut taxes for small business, many small business owners say this defeats the point as many never paid tax in the first place.

While China’s unemployment rate and economic growth is better than in many Western countries, including Australia, growth in the world’s second-largest economy is slowing to its lowest rate in a decade. Official GDP data due out Monday is expected to show growth slowed to 6.4% with full-year growth coming in around 6.6%. But the official figures will mask the challenges facing many of China’s small businesses, which are struggling to compete with large state-owned companies and the boom in online shopping and services.

Despite this, Beijing’s economic policymakers made it clear last week that it wants to help the millions of small business owners who make up the backbone of the world’s second-largest economy.

“I feel business is getting more difficult. It is getting harder to run a business in China now,” said Shen Lihua, who opened his souvenir store in Shanghai’s tourist hot spot Yuyuan Garden 14 years ago. He is busy when the reporter arrives, as locals pile in to buy Lunar New Year decorations, but he said business is generally slow. His main concern is rising rents, labor costs and tougher regulation, which was making it harder to make a profit. Many small business owners seem unaware of the tax cuts outlined by the government last week.

“Business is not good. There are less pedestrians and less crowds than before,” said another stall owner, Che Mingli, who is also selling Lunar New Year decorations. New regulations mean the trestle tables laden with goods cannot be extended out onto the street like they were previously and he said this has reduced sales.

He blames a sluggish stock market for keeping people away because they are concerned about their investments and have less money to spend. “People are less comfortable spending,” he said. Che opened the business 10 years ago and said business was good up until 2017 when he started to feel a slowdown. His rent has almost doubled in the past two years.

While’s China’s growth still overshadows many Western economies including Australia, the economic slowdown is causing problems for President Xi Jinping as he comes under pressure from the United States to give up some of the generous trade benefits that contributed to its boom. The latest slew of economic data, including falling car sales, slowing retail sales and the country’s debt pile is making investors globally anxious. If China runs into trouble, the world economy will feel the effects.

While few believe the country is heading for a recession, China’s ruling Communist Party is being forced to explore new ways to stimulate investment and growth without jeopardizing efforts to reduce debt.

China’s inflation-adjusted GDP slowed to 6.5% in the third quarter and economists expect this to slow to 6.4% in the fourth quarter, according to consensus estimates published by Bloomberg and Reuters. China’s leaders will officially release 2019 GDP forecasts in March. Comments by top economists in China and government officials suggest the government is preparing to lower targets for the current year to as low as 6%.

Economists in Australia and globally are divided over how to accurately measure the health of the Chinese economy. Many believe the official data in a country where the ruling Communist Party does not tolerate provincial governments missing targets, is unreliable. But others point to a long history of China bears being proved wrong and believe growth remains robust compared to almost everywhere else in the world.

There is little doubt growth is slowing though and the big question is how far will China’s leaders go to stimulate growth and resolve its trade dispute with Washington.

Retail sales in November grew at their weakest rate in 15 years, the Purchasing Managers Index (PMI) was flat in November for the first time in two years and power consumption slipped 9 percentage points in 2018. China’s car sales fell for the first time in almost three decades in 2018 after the government cut subsidies. There are already signs in the local media that Beijing will lower last year’s 6.5% target to as low as 6%. Property sales are falling amid reports developers are offering steep discounts to attract buyers.

“It is an economy which is absolutely slowing but it is not an economy which is showing major signs of weakness,” he said. “We are not facing this with incredible trepidation, this is a slowdown and we really hope they get their act together on trade negotiations so we can stabilize that uncertainty.”

McKay said housing starts are up and the government is likely to bolster infrastructure and the automotive industry. He also points to strong steel production, power generation, excavator output and sales of air conditioners as signs that the economy remains robust. Supply side reform meant demand for Australia’s high quality iron ore and coal also remained steady as China shut down inefficient steel mills using low quality commodities. Demand for gas was also a bright spot in the economy.

Dion Hershan, head of Australian Equities at Yarra Capital Management in Melbourne and a regular visitor to China, is cautious on the outlook for China’s growth but agrees that demand for Australian commodities is stable for now.

”Over time we expect the volume and value of coal and iron ore exports to decline, in part because more local scrap steel will become available,” he said.

Economists in China note unemployment is rising as companies lay off workers and private sector confidence is weak. It is unclear how effective government policies will be in addressing the slowdown.