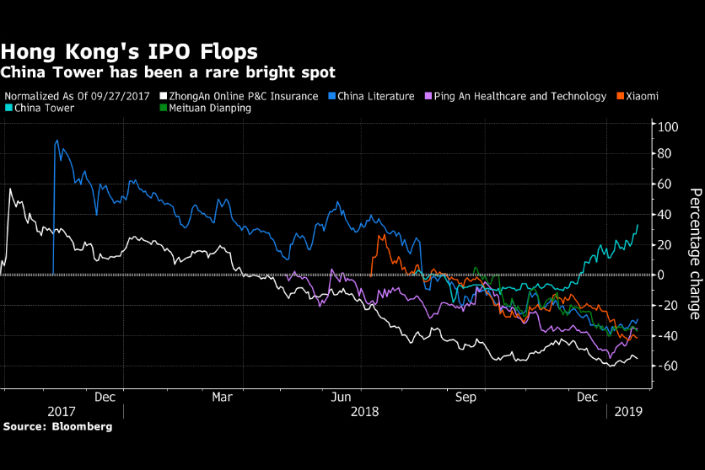 (Bloomberg) — Investors locked into holding newly listed Hong Kong stocks could only watch as last year’s bear market ate away at their returns. The shackles will soon be off.

Xiaomi Corp. saw a wave of selling after its lockup period — when key investors are banned from selling stock — ended three weeks ago. Similar restriction terms are due to end for China Tower Corp. next month, followed by Meituan Dianping and Haidilao International Holding Ltd. in late March. They’re among more than 50 companies whose mandatory holding periods are yet to expire in Hong Kong this quarter, according to data compiled by Bloomberg.

The city was host to the world’s busiest venue for initial public offerings (IPO) in 2018. But a market rout has put the onus on their sky-high valuations, making it more likely that early shareholders will exit as soon as they are able.

“Venture-capital investors pressured tech companies to come to market last year, and there was a very strong pipeline with very high multiples across the board,” said Travis Lundy, a special situations analyst who publishes on Smartkarma. “Now that is coming out.”

China Tower’s expiry on Feb. 8 will unlock shares owned by its 10 cornerstone investors, including Hillhouse Capital, Och-Ziff Capital Management Group LLC and Alibaba Group Holding Ltd. They bought a combined $1.4 billion of shares in the IPO. Early investors in Meituan Dianping will be able to sell come March 21 — the food delivery giant attracted five backers who bought $1.5 billion of the stock in the offering.

Hotpot chain Haidilao’s post-IPO restriction ends on March 26. Cornerstone investors agreed to buy a combined $375 million of stock, according to the IPO terms from September.

The Xiaomi selling was made more severe by the IPO already being one of Hong Kong’s worst before the lockup period expired. Along with concern over its high valuation, the lackluster performance and uncertainty over the smartphone maker’s growth prospects provided early Xiaomi investors with enough reasons to exit. Offloading the shares still proved hugely profitable for some who took part in the early funding rounds.

The end of a lockup period doesn’t always trigger a rush for the exit, particularly if a stock has performed well on the secondary market. China Tower — a state-run company that operates almost all of China’s mobile-phone towers — is up 32% from its listing price. Haidilao is also holding above its debut level thanks to a 6.9% jump in January.

Improving market sentiment in Hong Kong could also provide some comfort. A more dovish Federal Reserve and stable Chinese currency has made the city’s stocks worth buying again in January, along with valuations that are still well off their peaks from a year ago. Strategists who were bearish on Hong Kong stocks last year, such as Jefferies Hong Kong Ltd.’s Sean Darby, have turned more optimistic.

“The worst-case scenario for the markets of a string of aggressive rate hikes by the Fed is off the table in the short-term,” Jefferies strategists led by Darby wrote in a note this week, a significant shift from their negative stance in November. “The equity market is attractively priced versus local government bond yields.”

Still, prospects for Meituan Dianping may not be too bright, given the stock has lost more than 30% since a September debut.

“VC investors don’t get credit for holding onto a large position in a stock for years after listing,” said Lundy. “One can expect them to want to realize their profits.”