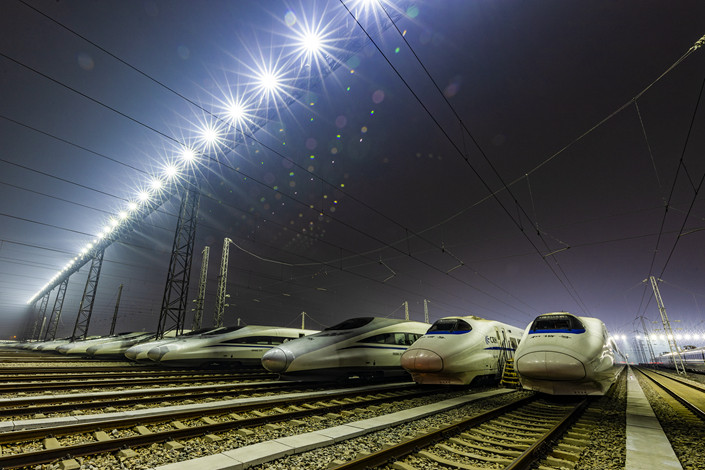 * Large investments in high-speed rail have meant less construction of regular railways, which has led to a serious imbalance in China’s transportation infrastructure

(Beijing) — People often see only the convenience of China’s high-speed rail network and boast about it being the world’s longest, but they turn a blind eye to its enormous debt and operating losses, as well as the serious deterioration of the country’s transportation structure.

By the end of 2018, China’s high-speed railway’s operating mileage had reached 29,000 kilometers (18,000 miles). The cost of a high-speed railway is two to three times that of conventional railways. And because high-speed rail can only transport people, not goods, there may be sufficient demand for it only in large, densely populated areas, where the income from fares can cover the construction and operating costs.

At present, most of the country’s high-speed rail lines have idle capacity, with the notable exceptions of the Beijing-Shanghai and Beijing-Guangzhou lines. The indicator that best reflects the efficiency of rail transportation is called “transportation density,” which is the average transport volume per kilometer of railway per year.

Having the world’s largest high-speed rail network with a low transportation density is indicative of significant financial risk. The ongoing construction of such a large high-speed network may place a greater debt burden on China Railway Corp. (CRC), which runs the network, and local governments, making it a “gray rhino,” or obvious threat to the Chinese economy.

China’s high-speed rail mainly relies on debt financing, and the construction of the high-speed railway has caused CRC’s debt to surge almost tenfold from 476.8 billion yuan ($70.70 billion) in 2005 to 4.72 trillion yuan in 2016.

Although CRC’s total passenger revenue reached 169.3 billion yuan in the first half of 2018, and could possibly reach 340 billion yuan for the entire year, its total liabilities have reached 5.28 trillion yuan as of September. Considering the amount of borrowing that local governments did to finance the construction of the high-speed rail network, the country is now laboring under an enormous amount of high-speed rail debt and the accompanying financial risks.

Resources are always limited, and the large investments in high-speed rail have meant less construction of regular railways, which has led to a serious imbalance in China’s transportation infrastructure. Chinese people used to call rail the “Iron Boss,” but since 2016, it has fallen behind road and water transportation for freight.

Because China’s railway freight capacity cannot meet the demand, a large number of vehicles have been deployed to transport goods and raw materials, like coal, over the roads, which greatly increases logistics costs and seriously reduces overall efficiency in the transportation system.

People often ignore the huge and growing debts of CRC, as they tend to believe that the central government has the money to cover its liabilities. The local governments’ debts for the construction of high-speed railway lines remain hidden, as they are mixed with other types of debts. The debts together could be as high as 18.29 trillion yuan, according to some estimates.

The Beijing-Shanghai high-speed rail line — the county’s most successful line — generates annual profits of about 10 billion yuan on assets of 220 billion yuan, but its return on assets stands at less than 5%, almost the same as the benchmark bank interest rate. If assets cannot create much income compared to debts, the government can only issue the currency to offset the debts. This may lead to serious inflation and create huge financial risks.

First, the structural reform of China’s railways should focus on solving the problem of the idle capacity of high-speed rail and the shortages of railway freight capacity.

Second, high-speed railways mainly meet the demand of consumers rather than the demand for transporting goods. Building high-speed railways in the central and western regions with sparse populations results in insufficient freight capacity and idle rail transportation capacity. This does no good to the economic and social development of those regions.

Third, China’s urbanization has entered a stage of metropolitan development, and the metropolitan area is the engine of economic growth. Another key area of the nation’s current railway construction should be rail transit in metropolitan areas. Commuter railways in metropolitan areas cannot only relieve the pressure on population, transportation, environment, employment and housing for megacities, but also help create a number of small and midsize cities along the commuter rail to accommodate larger population inflows. This can achieve a higher level agglomeration economy.

Zhao Jian is the director of the China Urbanization Research Center at Beijing Jiaotong University.