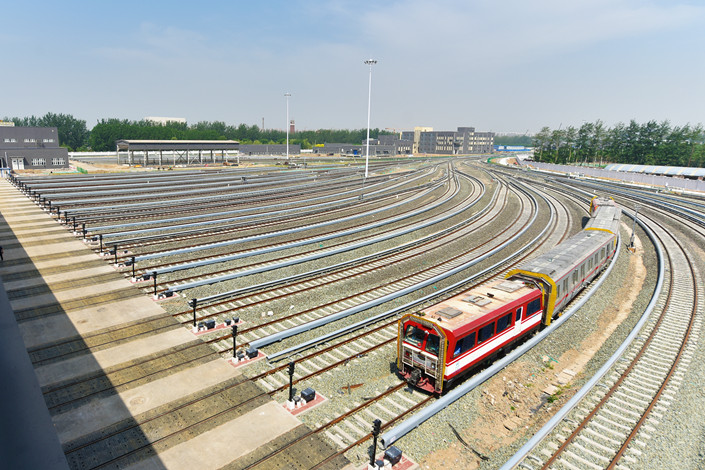 The Beijing Subway’s Line 8 is put into trial operation, without passengers, on May 25. Photo: VCG

Shanghai will get six new subway lines and 286 kilometers (178 miles) of new rail, costing a planned total of 298.35 billion yuan, the National Development and Reform Commission said in statement (link in Chinese) on Wednesday. The projects are expected to be completed by 2023.

Hangzhou, a city about 160 kilometers southwest of Shanghai, will see two existing railways get expansions costing a planned total of 14 billion yuan, according to a separate statement (link in Chinese). The commission also approved a new airport rail link for 41.98 billion yuan in the city.

This is the latest sign that policymakers are softening their push to restrict such projects, which came under the spotlight last year as part of Beijing’s broader efforts to rein in local governments’ debt-creating infrastructure investments.

Last year, Baotou and Hohhot, both in North China’s Inner Mongolia autonomous region, scrapped plans for subway projects worth billions of dollars due to Beijing’s concerns about local government debt.

Even as recently as early July, the State Council, China’s cabinet, was still in austerity mode, as it rolled out new rules raising the financial bar on fiscal revenue and gross domestic product that cities must have to qualify for new subway and light rail projects.

However, the deleveraging campaign, along with the trade war with the U.S., has put pressure on the Chinese economy, propelling Beijing toward a more-active fiscal policy.

In late July, a meeting convened by the State Council unveiled a package of pro-growth policies, including a 1.35 trillion yuan spending plan for local government infrastructure projects.

China’s subway investment spree in recent years mirrored those of high-speed railways. As of this month, China has a total of 127,000 kilometers of tracks, of which 20% are high-speed lines.

This investment-led development has led to the national rail operator, China Railway Corp., accumulating as much as 5.04 trillion yuan in debt as of early this year.