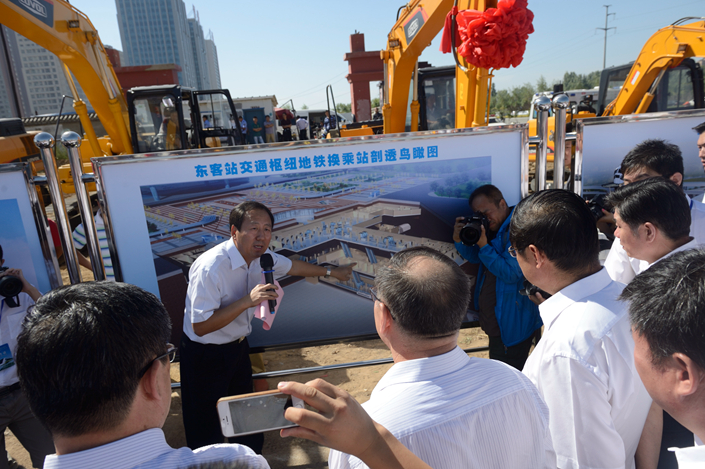 Hohhot, capital of the Inner Mongolia Autonomous Region, has canceled construction on its subway Lines 3 and 4. Work on subway Lines 1 and 2, scheduled for completion in 2020, won't be affected. Above, Hohhot Deputy Mayor Sun Jianhua discusses the design of the city's proposed subway on Aug. 20, 2015, in Hohhot. Photo: Visual China

Another city in northern China’s Inner Mongolia autonomous region has halted construction of subway projects worth billions of dollars, as the central government tightens scrutiny of local authorities’ infrastructure financing.

Separate sources from banks and regulatory bodies told Caixin that Hohhot, the capital city of Inner Mongolia, scrapped plans to build two subway lines and one expressway linking the city with Ordos, a mining city in southwest Inner Mongolia.

The abandoned construction in Hohhot followed similar moves in neighboring Baotou, also in Inner Mongolia. Caixin learned from sources close to the matter that the central government called off a 30 billion yuan ($4.5 billion) subway construction project in Baotou in August because of concerns over the drain on city coffers.

The cancellation of the Inner Mongolia subway projects is having a ripple effect in other cities. Several city governments, including those of Xianyang in Shaanxi province and Wuhan in Hubei province, said in statements that their subway plan are unlikely to win immediate approval under the central government’s crackdown on financial risks related to borrowing for such projects.

In Hohhot, the canceled subway Lines 3 and 4, involving a total investment of 27 billion yuan, were to be part of an urban subway network project approved by the State Council in April 2014. Hohhot planned to build 54.9 kilometers (34.1 miles) of subway lines to serve the city’s 3 million people with investment totaling 95 billion yuan by 2023.

Construction of subway Lines 1 and 2, which began in 2015 and scheduled to be completed by 2020, will not be affected, according to a source from Inner Mongolia Communications Investment Co., a government-backed infrastructure contractor.

Hohhot also halted a 26.4 billion yuan plan to build a 181-kilometer expressway to Ordos, as approved by the regional government in July.

While new city-rail projects have been encouraged in China since 2015 to boost economic growth, the construction halts in Inner Mongolia reflect tightening scrutiny by the central government as part of efforts to contain local-government borrowing risks, sources told Caixin. The central government noticed the heavy spending plans in Baotou and Hohhot in August and told the cities to halt the projects and use the money to support business development and people’s livelihood instead, sources told Caixin.