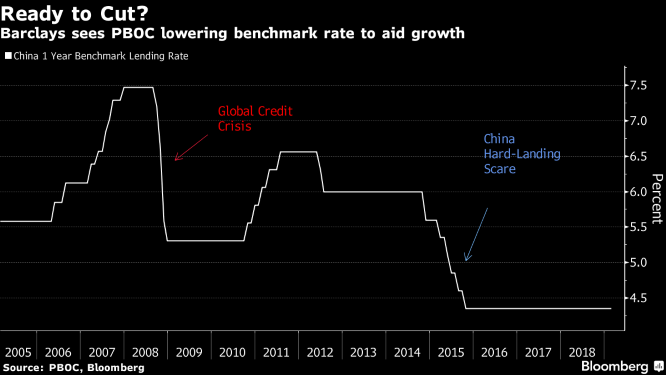 The rapid deterioration in China’s economic data could spur the central bank to cut its benchmark interest rate as soon as Feb. 1, according to Barclays Plc economists.

“Existing measures are not sufficient to lower the financing costs of the real economy, in a down-cycle with rising credit risk and falling producer-price inflation,” the analysts led by Jian Chang wrote in a note. “Hence, lowering the risk-free rate is unavoidable, in our view,” she wrote.

It’s a notable call: Chang was the only economist in Bloomberg surveys to correctly predict rate cuts that policy makers enacted in late 2014.

The central bank isn’t in a hurry to cut the one-year lending and deposit rates, according to Citibank economists. However, in a note from Wednesday, they said they expect a cut in the Standing Lending Facility rate, which is the Chinese equivalent of the Fed’s Discount Window, from as early as February.

Manufacturing purchasing-managers index surveys released on Thursday and Friday are the latest evidence of a continuing downtrend, which policy makers are struggling to arrest with months of targeted stimulus measures. The central bank has added liquidity through five cuts to the reserve-requirement ratio since early 2018, but hasn’t shifted the more powerful one-year lending rate since 2015.

Barclays forecasts the PBOC will cut benchmark rates twice, by 25 basis points each in the first and second quarters. However, the majority of economists surveyed by Bloomberg see the 1-year lending rate unchanged through the end of the first quarter, and most no change by the end of 2019.

Chang argues that with a more “patient” stance being adopted by the U.S. Federal Reserve this week, and the yuan’s robust performance in January, previous impediments to cutting borrowing costs more broadly in China have been removed.

History shows that when PMI surveys fall below the 50 mark, exports contract and producer-price inflation slows sharply, the PBOC tends to act, according to Barclays research. All three of those conditions have been met in recent weeks.

“The dovish tone and proactive stance exhibited by the PBOC in January underscore significant downward pressure on growth from both weak domestic demand and a rapid deterioration in the external environment,” Chang wrote.